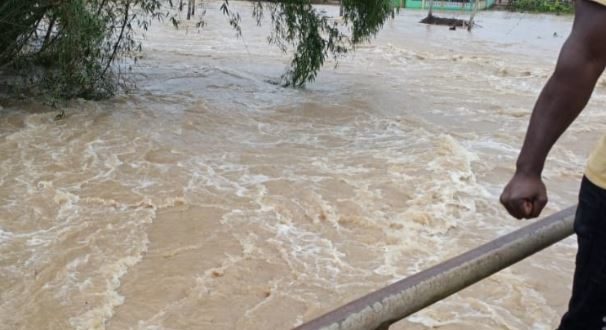 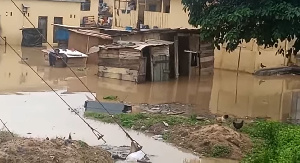 Prison officer feared dead after being washed away by floodwaters

The Ankaful Main Prison Camp has been taken over by floodwaters following heavy rains recorded in some parts of the Central Region.

The downpour recorded in the region over the past few days has seen several communities experiencing perennial floods.

A voice running commentary indicated that the camp got flooded as a result of a river overflowing its bank following the heavy rains.

Meanwhile, a prison officer is feared dead after he was washed away by floodwaters.

The officer was carried away by the running water while he was rescuing residents from being washed away along the Cape Coast-Elmina Highway in the Komenda Edina Eguafo Abraim Municipality of the Central Region.

According to a report by Kasapafmonline.com, the incident occurred on Saturday morning, June, 18 when over 30 prison officers from the Ankaful Prison were deployed to the area to rescue residents who had been inundated with floodwater.

The body of the said officer whose name has not been given is yet to be retrieved.