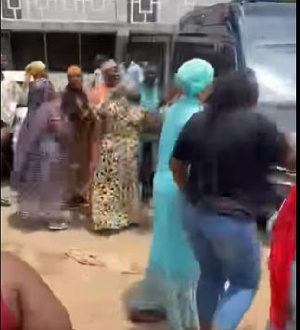 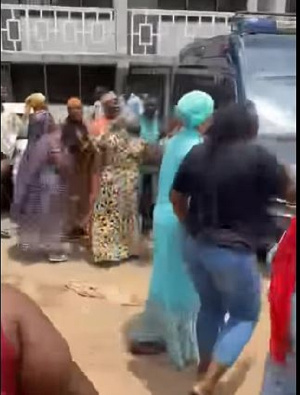 The family of the late bride who was mysteriously murdered less than a week after her marriage are demanding justice be served in their case.

The family could not hide their pain after the court granted the husband bail after two weeks following their arrest.

In a video shared by Atiku Iddrissu on Facebook, the family and friends were captured hooting and hurling curses at the suspects while they were being led into a van at the police headquarters.

The family went further to attack their lawyer who was heading to his car.

While accusing him of defending the suspects whom they tagged as criminals, they hooted at him and hit parts of his car while he tried turning around before heading out of the premises.

Earlier this month, a 32-year-old woman was found dead in her house barely one week after she got married to her husband in Abeka a suburb in the Greater Accra Region.

The woman identified as Muniratu Moro, who got married as a second wife is said to have been found lifeless in a pool of blood in her marital home with a cut in her throat and her thigh.

In an interview with Joynews, the family of Munira Moro said they suspect she was murdered. Her brother who was convinced it was manslaughter said the family will resist attempts to bury her immediately as the Muslim custom demands.

“I had a call around 9PM that my sister has been stabbed, so I thought I was going to see a body with small cut but when I got there, it was a different thing all together.

“She was killed in her room and then dragged into her rival’s room, the way she died was not natural and we need to know how she was murdered,” brother of the deceased, Mohammed Samba said.

“…for you to live in the house like that even if you beat your, son, in your room your neighbour will hear it, for someone to be killed in that manner and dragged into a different room and nobody is telling us anything and you want us to bury her immediately after she died?

Reports indicate that the family has denied the husband’s family access to Muniratu’s body for burial as they want the police to conduct an autopsy test before she is buried.

Another family member said, “she was slaughtered like an animal, we can let it go”

It was upon this development the police arrested the first wife and husband of Muniratu who have now been bailed after two weeks.

Previous ‘I made mistakes, learnt a lot more about my players’ Otto Addo on Brazil defeat
Next Seek God, time to account for your evil deeds – A Plus tells CID boss Ken Yeboah