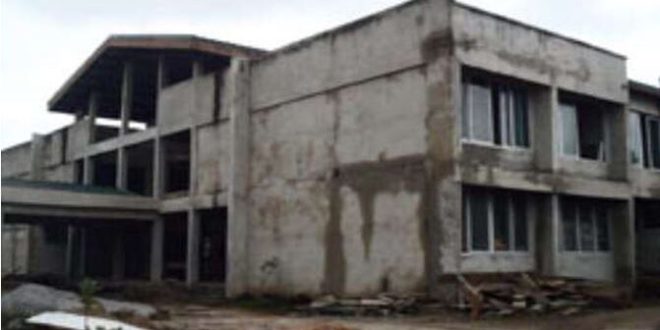 The Medical Superintendent for Tafo government hospital, Dr Kwame Agyemang expressed dissatisfaction over the abandonment of the Tafo Tafo hospital project in the Ashanti Region.

The Tafo government hospital which was established in 1976 as an Urban Health Centre to serve a total population of Three thousand two hundred and forty-one people (3,241) within the catchment area and was upgraded to a hospital status in the year 2000.

Dr Agyemang in an interview on Oyerepa Breakfast Show with Nana Yaw Mensah Joel expressed his dissatisfaction with the hospital project that has been abandoned for almost 17 years now and left to rot and collapse under rains.

According to him, management of the hospital has made several appeals to the Ministry of Health, the member of parliament for Old Tafo and other stakeholders for the past 17 years since the commencement of the project and all have fallen on deaf ears.

“This is only a 57-bed capacity facility but serving about 145,824 people within the municipality now ….” meanwhile the facility doesn’t have what it takes to contain such numbers so we have no option but to refer most patients to the Komfo Anokye Teaching Hospital (KATH) which shouldn’t have been so, “ he said.

“Currently, the hospital is the referral Center for health facilities in the Mampong Municipality, Sekyere South district, Kwabre East Municipal and Suame municipal and now serving about 145,824 within its catchment area but still operating under systems built-in 1976” he added.

He, therefore, called on the government to speed up the processes of funding for the completion of this project to enable them to work efficiently and ease up pressure on the facility.