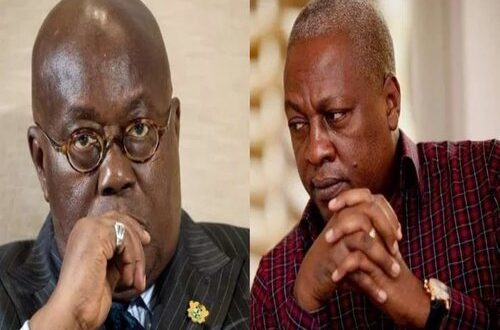 Akufo-Addo is bathing in corruption – Mahama

The Presidential Candidate of the National Democratic Congress(NDC), Mr John Dramani Mahama, has called out President Akufo-Addo or not only superintending a corrupt government but also offering protection for corrupt government appointees who are largely members of the president’s family and friends.

Speaking to a crowd at Talensi, Mr Mahama said on December 7, 2020, when Ghanaians go to the polls, they have an opportunity to vote out President Akufo-Addo who is “literally bathing in corruption”.

“All you see is corruption. The time we were in office, they tagged us with the brush of corruption and they made so much noise about it. Today the president is bathing in corruption”, he said.

He said the next NDC government would not only prosecute the perpetrators of such acts but would use the appropriate measures to retrieve the national resources that have been diverted into individuals’ pockets.

Mr Mahama cited the now-defunct Power Distribution Services (PDS) scandal, the Agyapa Royalties deal and the seizure and missing of excavators as “clear evidence of an attempt by the President and his cronies” to short-change Ghanaians to enrich themselves.

Mr Mahama said although the President came into ffice, riding on the back of a commitment to fight corruption, many Ghanaians had now realised that that promise was empty and was only meant to deceive Ghanaians.

He said instead of President Akufo-Addo showing leadership and commitment to the fight against corruption, he has rather a without shame, become an obstacle to institutions and individuals who are mandated by law to fight corruption.

Mr Mahama said President Akufo-Addo does not only chase out of office those who fight his corrupt appointee’s ut he has also tacitly introduced an alien culture of silence never witnessed in the Fourth Republic.

Aside the media that he said had been forced into silence through intimidation, Mr Mahama said it was not lost on him and many Ghanaians that state institutions with the mandate to fight corruption had also been hounded out of their roles.

“This government has been a scam on Ghanaians. They are swimming in corruption. Amidu could not perform because the corrupt ones are the family members of the president,” he said.

Mr Mahama also cited the Auditor General, Mr Daniel Yaw Domelevo, as one of the victims of the President resistance to the fight against corruption.

“This corrupt Akufo-Addo government must go. NPP must go”, he said to applause and cheers from the crowd.