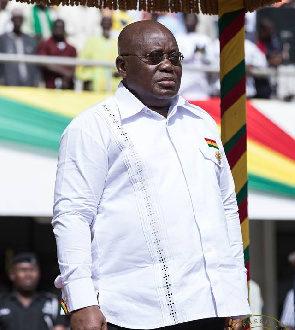 To the unsuspecting Ghanaian, the [email protected] event held in Tamale yesterday was proper and one to behold. It was a novelty as it marked the first ever Independence Day Celebration to be held outside the nation’s capital city of Accra.

The event saw thousands of citizens and foreign dignitaries, including the President of Niger, Mahamadou Issoufou converging at the Aliu Mahama Stadium in Tamale. It was all joy and a dream come true for the people of Tamale as they became the centre of attraction for the history made. But underneath that pomp and pageantry, lies what would wrench the hearts of many tax-paying citizens who struggle day and night to make ends meet.

If anyone ever thought that the expenses incurred during [email protected] Celebrations were shocking and outrageous, the budget for the [email protected] Celebrations held in Tamale yesterday would make them go mad. Indeed, this year’s event would pass as the biggest money making machine for apparatchiks of any government in the history of Ghana. From street paintings to flag hoisting, grass-trimming to hotel bookings, the motive of fleecing the state was the signature our investigations reveal all over this event.

A memo intercepted and in our possession, marked CONFIDENTIAL reveals a whopping $3 million (equivalent to GH¢ 16,500,000.00) budget earmarked and actually approved for the Tamale event.

The memo with its attachments, from the Chief of Staff to the Finance Minister, requesting for the release of the said funds, reveals a shocking list of overpriced items and contracts given to one party bigwig after the other.

Perhaps what would incense Ghanaians most is the cost of toilet papers for additional portable toilets placed around the stadium. It is budgeted at a jaw-dropping Gh¢ 216,432.60. An item listed as ‘Party Security’ is budgeted to cost the tax payer a whooping Gh¢ 115,000.00 with many other outrageous quotations.

The event itself was a spectacular display of rich Ghanaian culture laced with a show of special Military force and skills alongside series of jolly displays from the Ghana Police and the other security agencies.

The mysterious SWAT team which has recently been in the news for the brutalities they meted out to innocent Ghanaians during the Ayawaso West Wuogon by-election were not left out of the displays. For even the fiercest critics of the government, the choice of Tamale for the event following the conclusion of efforts leading to the amicable settlement of the Dagban conflict is commendable.

Our investigations have also revealed that the pre-anniversary preparations alone cost the taxpayer an amount of $551,080.00.

It is worthy of note that days before the event was held, some individuals asked government spokespersons to abreast the nation with the cost involved in holding this year’s Independence Day outside Accra, to no avail.

Our investigations have revealed that the Seat of Government is divided over the budget for the event, the reasons for which government communicators were tight-lipped on the exact cost of the event.

These revelations are raising questions on the need to proceed on the hint of the president to rotate the hosting of Independence Day Celebrations across the regions other than the national capital, Accra.

Previous Residents Of Tamale Lauds Zoomlion Ghana For Making Historic 62nd INDECE Anniversary Spectacular!
Next Don’t read this if you are not a WOMAN