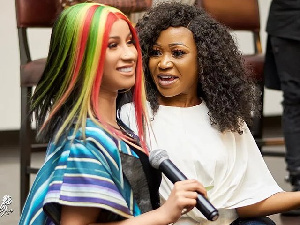 A section of the public vehemently criticized Rosemond Brown for showing her dance prowess when she finally met Cardi B at the Kempinski Hotel in Accra, Sunday, but the actress’s decision to twerk and roll on the floor despite not being a good dancer, has put her on a pedestal many never envisaged.

Known in showbiz circles as Akuapem Poloo, the actress who has garnered huge following on social media and cemented her name in the industry as a result of her weird behavior, was projected on Cardi B’s Instagram Stories few hours after their meeting.

The American rap star shared Akuapem Poloo’s photograph twice with a caption ‘My Twin’, a recognition which has sparked conversations among Ghanaians.

“My beautiful sister repeated it again ooo. She said Akuapem Poloo my twin,” said the elated television personality in an Instagram post.

What has made Akuapem Poloo more emotional is the fact that Cardi B now follows her on Instagram.

“Jehovah!” she exclaimed. “I’m still in tears. Eii, Rosemond Alade Brown! I’m blessed. Cardi B, God bless you for me.”

The expression of her happiness seems not to be ending soon as she has in different posts, showered praise on Cardi B.

“Thank you Cardi B for putting a smile on my face. People said I was the reason why you didn’t show up in the afternoon, you see me like a monkey but my beautiful twin sister proved them wrong. Aww Cardi B, you are real because real recognize real,” she said.

Akuapem Poloo was one of the many female celebrities who thronged Kempinski Hotel to have a ‘meet and greet’ session with Cardi B. Some of the celebrities after waiting for six hours left the venue as they were told Cardi B would be ready in two hours. What irked them the most was the fact that they spotted the Grammy award winning musician enjoying khebab at the poolside alone.

Akuapem Poloo however stayed in her quest to meet the rapper. During the questions and answers period, Poloo took the opportunity to show off her dance moves. Cardi B could not sit aloof but to join her although the Ghanaian celebrity’s dance was not impressive.