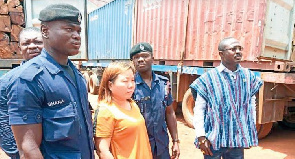 The 43-year-old Chinese woman who was arrested by the Tamale Regional Police Command for allegedly possessing large quantities of rosewood illegally appears to have jumped bail.

Helen Huang was granted bail by the police last Tuesday after she was arrested with two trucks carrying four containers of rosewood, which has been banned.

According to him, the police have contacted the surety to produce the suspect before close of today or face prosecution.

Supt Acheampong hinted that if the suspect fails to report to the police station, the police will be forced to get a warrant for her arrest.

“We have called on the surety to produce her so if he fails, we will take him to court for the court to take action against the surety and declare her wanted with her pictures,” the police officer said.

Many people overexploit rosewood in the wild despite a 2010 moratorium on trade and illegal logging which continues in the country on a large scale.

In Ghana, the Ministry of lands and Natural Resources has banned the harvest of rosewood in line with the Convention on International Trade in Endangered Species (CITES).

Helen Huang was arrested at a barrier at Vittin, a suburb of Tamale.

Upon her arrest, Helen Huang allegedly claimed ownership of the rosewood, adding that she had the right documents to cover the rosewood but failed to produce the documents.

The suspect was transporting the rosewood through the Northern Region to Tema in the Greater Accra Region.

There was drama at the Regional Police Command when Helen Huang accused the police at the barrier of demanding bribe from her to allow safe passage.

According to her, she was arrested because she refused to pay bribe demanded by the police and not because she does not have the right documents.

Another Chinese, Aisha Huang, who was deported last year, also engaged in widespread illegal mining for many years in the country until her arrest.

The two share similar surname and people are uncertain whether they are related.