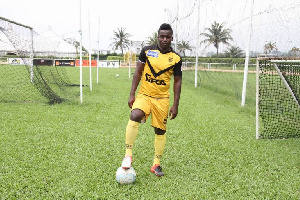 Former Asante Kotoko forward, Ahmed Toure has arrived in Ghana to complete his move to Medeama SC on a free transfer.

The 33-year-old is currently unattached after ending his short spell at Guinean top-flight league side AS Kaloum in December 2020.

Medeama has been prolific in front of goal following the departure of top marksman Prince Opoku Agyeman to South African PSL side Cape Town City FC.

The absence of Prince Opoku Agyemang has made the 2020/21 Ghana Premier League campaign very difficult for the former CAF Confederation Cup campaigners compelling management of the club to settle on the Burkinabe international.

Toure arrived at the Kotoka International Airport on Thursday and will be holding talks with officials of Medeama SC over his possible switch.

He will be signing a two-year deal worth $20,000 should he pass the mandatory medical test.