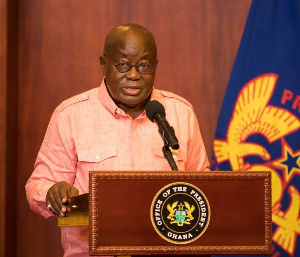 Agyapa deal will bounce back – Akufo-Addo

President Akufo-Addo has stated that government will re-engage parliament in the coming days on the future of Agyapa transaction.

Delivering his first State of the Nation (SONA) in his second term Tuesday, President Akufo-Addo indicated that his government will bounce back to give new direction that will guide the implementation of the controversial deal yearning to be resurrected in the 8th Parliament.

Some 15 Civil Society Organizations (CSOs) code-named Alliance of CSOs working on Extractive, Anti-Corruption and Good Governance fought for the immediate suspension of the implementation of the Special Purpose Vehicle, Agyapa Royalties Limited established by government though the Minerals Income Investment Fund.

In 2018, Parliament passed the Minerals Income Investment Fund Act, 2018 which establishes the fund to manage the equity interests of Ghana in mining companies and receive royalties on behalf of the government. The purpose of the fund is to manage and invest these royalties and revenue from equities for higher returns for the benefit of the country.

The government then, through the Minerals Income Investments Fund(MIIF), set up Agyapa Royalties Limited to monetize Ghana’s gold royalties. This was after Parliament on August 14, 2020, approved the Agyapa Mineral Royalty Limited agreement with the government of Ghana despite the walkout by the minority.

In exchange, the company plans to raise between $500 million and up to about $1 billion for the government on the Ghana and London Stock Exchanges to invest in developmental projects.

The deal, however, has become a topical issue following concerns first by the opposition National Democratic Congress leading up to the December 2020 general elections.
On August 14, 2020, a few days after approving an amendment to the MIIF Act, the Minority walked out during the approval process of the very transaction agreements, the facilitation of which the amendment to the Fund’s statute was amended.

Civil society groups quickly added their voices to the opposition, describing the Special Purpose Vehicle (SPV), being created then, Agyapa Royalties of Jersey, as not being transparent, potentially corrupt, under valued and that it must be suspended for greater stakeholder involvement, according to some of the dissenting voice.

The government has however insisted that the deal is in the best interest of the country. The President, last year, directed the Finance Minister and Attorney General to review the transaction agreements and make the necessary adjustments to address some of the concerns raised by stakeholders, where appropriate.