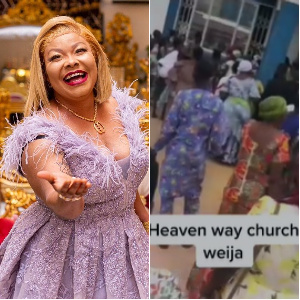 Scores of people who went to the church of one-time fetish priestess, Nana Agradaa, now known as Evangelist Mama Pat, are crying foul in what they describe as a scam by the repented woman.

In several short video clips that have since gone viral in the last few hours, a number of the victims are seen running away from the church building of Evangelist Mama Pat, even as many raised alarms about the fact that they had been deceived and scammed.

GhanaWeb’s further checks showed that the people were at the church in their numbers on the day because the repented priestess had earlier advertised through her television channel that she was going to give out monies to people.

She is also said to have advertised that she would double monies that are brought to her church, Heavenway Champion International Ministry, on the day.

However, as has been typical of her, particularly from the days when she was a fetish priestess, it seems the evangelist only played on the gullibility of the scores of people who appeared at her church to extort monies from them.

When she was done, as has been shared in a number of the videos available to GhanaWeb, she booted them out of the building, aided by her well-built bodyguards.

A number of the affected people are also heard ranting and calling her out.

“This is Agradaa’s church, Heavenway, and she advertised on her TV station that she was going to share monies to everyone only for us to get here, and she rather collects monies from people. She told people to bring ten million (GHc10,000) and come for two billion (GHc200,000) after which she asked people to leave the church. Things immediately turned chaotic here,” a lady giving voice commentary in one of the videos said.

While GhanaWeb cannot confirm all the claims in these videos, it is worth noting that this is not the first time people have raised alarms over the fishy activities of Agradaa.

The Ghana Police Service is also yet to comment on the matter, but GhanaWeb will keep its ears on the ground to update its readers and viewers on any new developments.

Meanwhile, watch some of the videos below: