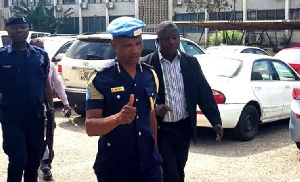 In court on Friday, when the case was called, Senior State Attorney Hilda Craig informed the court the state on Thursday, July 2, 2020, filed additional evidence to back their existing exhibits before the court.

“Yesterday, I filed a motion to add additional evidence to our exhibits which was already before the court. At the committal stage, we filed some exhibits and left with some and that is what we have filed,” the Senior State Attorney told the court.

However, the Commercial Division of the Accra High Court presided over by Justice Samuel Asiedu said the court does not have a copy of that application.

Defence counsel for all the accused persons also informed the court that they were only informed about the filing of the said additional evidence. They said they have not been served with copies.

The court also declined an application for variation of bail from lawyers of WO II Esther Saan, the only female among the 10 accused persons.

Though she was granted bail by the court last year, her lawyer indicated that she wants certain conditions attached to her bail term to be varied.

The state orally opposed the application for variation of bail.

Col Gameli and ACP Dr Agordzo have been charged with abetment to treason felony.

The facts of the case, as presented by Ms Craig, were that TAG plotted to destabilise the country and overthrow the government.

“Again, there were discussions on whether or not to kill the President in the process of overthrowing the government,” she said.

The prosecutor added that in June 2018, the security agencies picked up intelligence that the accused persons, under the auspices of TAG, had planned to overthrow and take over the government.

According to her, as part of the plan, Col. Gameli recruited Zikpi, who was a signal specialist with the GAF, to help jam the radio signals of the National Communications Authority.

TAG, she said, planned to jam all radio stations, with the exception of the Ghana Broadcasting Corporation.

The prosecutor said in furtherance of the plot, Dr Mac-Palm invited Kafui, who was a blacksmith at Alavanyo, to Accra to manufacture explosives and pistols for the group.

With regard to ACP Dr Agordzo,Ms Craig said he donated GH¢2,000 to TAG to aid its cause and also drafted a speech for Dr Mac-Palm to be read at the planned demonstration by TAG.