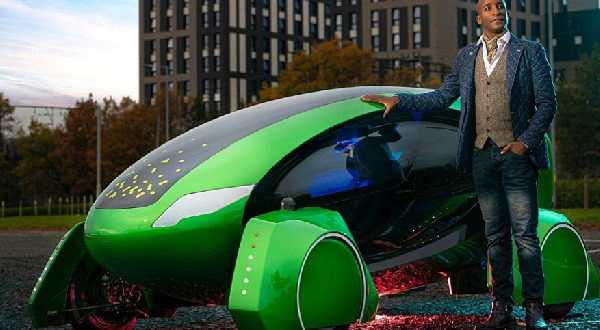 After his driverless car, Zimbabwe’s William Sachiti is changing the world one tech innovation at a time

William Sachiti is a Zimbabwean UK-based serial entrepreneur and founder of Academy of Robotics. The idea came when he struggled to find the right locations for the books he needed in a library while studying at Aberystwyth University in Wales.

This led him to create the first robot library where users could walk up to a robot and ask the robot for the exact location of a book and it would direct them, according to Forbes Africa. He subsequently launched the Academy of Robotics, a technology institute that specializes in creating technology to perform or simplify complex tasks, it says on its website.

In 2020, Sachiti built his flagship product called the Kar-go Delivery Bot which became one of the first vehicles designed for self-driving delivery to be licensed on the roads in Europe. “The company’s services now include: self-driving delivery, indoor logistics robots and road defect detection and analysis,” 35-year-old Sachiti told Forbes Africa.

Growing up, he spent time in both Zimbabwe and the United Kingdom. His grandparents lived in a small village in Zimbabwe and were mainly farming and herding cattle. Although he had a privileged upbringing, the time he spent with his grandparents in the village grounded him, he said.

After relocating to England in 2000, Sachiti worked odd jobs like selling double-glazed windows and doors. This subsequently led to a job as a stockbroker. His entrepreneurial journey subsequently began. He launched his first business when he was 19 years old. He started 123 Registration where he sold thousands of websites and domains. Although the startup was doing well, he sold it to an investor.

His second business was to create Clever Bins, a solar-powered digital advertising bin which was an advertising platform for cities, according to iharare.com. He took Clever Bins to the BBC Dragons’ Den. His invention was rejected by the Dragons as the worst idea they had ever heard at the time. However, he went on to license his idea in over 11 countries until the main license for it was finally acquired by someone.

According to Forbes, Sachiti made millions of pounds from the sale of multiple businesses and invested the money he made in robots. It was while at Aberystwyth University in Wales studying artificial intelligence and robotics that he made his first attempt at creating robots.