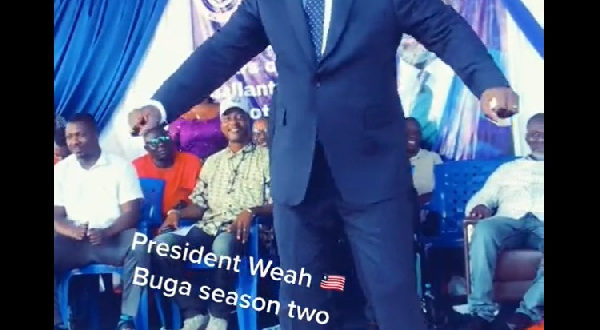 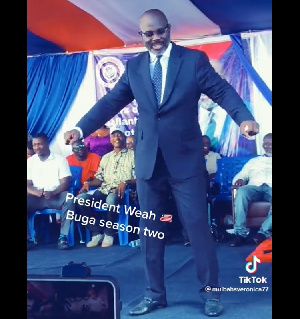 Former world footballer of the year, George Weah has jumped unto the Buga dance challenge on social media.

George Weah who is known for his footballing skills has been exhibiting another hidden talent of his which is dancing.

The ex-PSG player first appeared in a video dancing to the Buga song in his presidential suite which got the attention of many.

The ex-AC Milan player recently took to the dance floor and showcased his dance moves during a political rally in Liberia.

Weah who became the president of Liberia in 1995 has been trending ever since the video went viral of him dancing to Kizz Daniel’s hit song Buga.

President Weah became the first and only African footballer to win the FIFA Ballon d’Or in 1995.

During his days as a footballer, Weah won many trophies after spending 14 years in Europe and playing for some of the top clubs like Monaco, PSG, AC Milan and Chelsea.

George Weah was elected President of Liberia in the 2017 election after an illustrious football career.

Despite becoming the president of Liberia, George Weah has never shied away from playing football occasionally and dancing.

Previous Kuje Attack: Confusion as Correctional Service, Presidency disagree over number of escaped terrorists
Next This is why Good sex is a great pain reliever