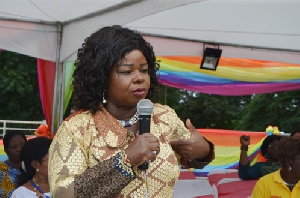 The chairperson for the Ghana Non-Communicable Diseases Alliance (GhNCDs Alliance), Dr. Mrs. Beatrice Wiafe Addai, has called on the government and stakeholders in the health industry to adopt strict restrictions on the consumption of excessive alcoholic beverages and smoking among the youth in the country.

She said these lifestyles they have adopted are among the factors that contribute to the increase of non-communicable diseases (NCDs) like hypertension, diabetes, cancers which are killing the youth at a fast rate and needs to be controlled.

Dr. Wiafe Addai made the call during a community campaign awareness organised by ANAQ Foundataion, an NGO and Ghana Non-Communicable Diseases Alliance (GhNCDs) at Duayaw Nkwanta in the Ahafo region on Thursday, March 5, 2020.

While commendeding the government for banning alcohol advertisements on radio and television till 8 in the evening, she called for an extension on the time to 10 in the evening, a situation she believed will help more in the control of excessive alcohol intake and smoking.

“There are increase of diagnosing of NCDs among the youth like kidney failure, hypertension, diabetes, cardiac related problems which are caused by alcohol consumption and smoking. The government should adopt more approaches in controlling adverts on alcoholic beverages on the radio, television and also to put a ban on cigarette and ‘shisha’,” she said.

Dr. Wiafe Addai who is also the Chairperson for the Ghana Cancer Board and President of Breast Care International (BCI) said NCDs are treatable, curable, called for a massive campaign in the country for an awareness creation and asked the public to visit the hospital frequently to check on NCDs status.

“I see the increase rate of NCDs among the youth as a challenge for everyone in the country to make sure the youth, who are the engine of growth and the future leaders, have good health, by coming on board to adopt strategies in the control and restriction on excessive alcohol and cigarette consumption by the youth,” she appealed.

Previous Techiman North District gets Weighbridge
Next The “Deadly Partner”; Who will bo bold to partner Mahama and ‘die’?