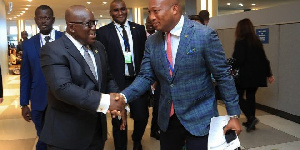 Ablakwa in a tweet posted on Thursday, October 20, 2022, believes that the free fall of the cedi must be seen within the broad context of a national security challenge.

His four-point solutions were:

a. Akufo-Addo should immediately suspend his regional booing tours – the President has been on regional tours recently, finished with the Ashanti and is currently in the Eastern Region.

b. Sack Finance Minister Ken Ofori-Atta – Akufo-Addo has intimated as recently as earlier this week that he will not be firing ‘competent’ Ofori-Atta.

c. Dissolve the Economic Management Team, EMT – the team by law is headed by Vice President Mahamudu Bawumia who has come under censure for his silence amid the crisis.

d. Convene a non-partisan emergency economic rescue forum to harvest fresh ideas – the government last held Town Hall meetings on E-Levy and swore not to go to the IMF. Pressed to the wall, Ghana is hoping to conclude an IMF deal by end of the year.

“The total crash of the Cedi must be seen as a major national security threat.

The economy is facing major headwinds that have been characterized by galloping inflation, consistent depreciation of the cedi and general high cost of living and of doing business.

The government is hoping to reach a deal with the International Monetary Fund, IMF, for an economic support programme aimed at shoring up the economy and easing the burden on ordinary Ghanaians.

On Friday, October 21, President Nana Addo Dankwa Akufo-Addo began a three-day tour to the Eastern Region to commission completed projects, inspect ongoing ones and interact with traditional authorities of the area.

The Eastern Region tour comes days after the president’s tour of the Ashanti Region, which made news headlines after Akufo-Addo was hooted at by some factions in the party’s stronghold over the economic hardship in the country.

President Akufo-Addo and his government have come under heavy scrutiny for failing to address the current economic challenges in the country.

The prices of goods and services have been continuously rising all year round, with inflation currently hovering over 37 per cent.

The Ghana cedi has been ranked the worst currency in the world among 148 currencies tracked by Bloomberg, overtaking Sri Lanka’s rupee, having depreciated by nearly 50 per cent so far in 2022.