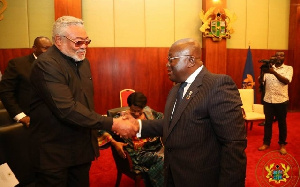 Member of Parliament for North Tongu, Samuel Okudzeto Ablakwa, has called out President Nana Addo Dankwa Akufo-Addo over plans for the purchase of a new presidential jet.

Ablakwa, who is also Ranking Member on Foreign Affairs, made reference to Parliamentary proceedings dating back some two decades ago to point out lack of consistency of Akufo-Addo in the matter of presidential jet purchase.

According to the 15th February, 2000 Parliamentary Debates report Ablakwa dug up, Akufo-Addo – then Abuakwa Member of Parliament, had risen in the house to expressly oppose plans by the Jerry John Rawlings government to purchase a presidential jet.

The jet in question was the Gulfstream GIII which was to cost the taxpayer $19 million dollars. Akufo-Addo argued at the time that the purchase of an Executive jet was “very low on the scale of priorities.”

Time they say is no one’s friend. It appears principle and consistency are such rare commodities.

Find below, an extract from Nana Akufo-Addo’s debate contribution in Parliament some 21 years ago when President Rawlings initiated steps to purchase Ghana’s third Presidential Jet – the Gulfstream GIII.

“Nana Akufo-Addo (NPP — Abuakwa): Thank you very much, Mr. Speaker, for the opportunity to contribute to this debate. It is good to see that the Minister and his spin-doctor, the Minister of Communications, are both here to listen to us on this matter. Mr. Speaker, I intend to limit my intervention to two main issues.

“Already, my hon. colleague, the Member for Offinso North (Dr. K.K. Apraku), has, in his usual powerful presentation, alerted us to the sensitivity of this transaction; that at a time when there is a crying need for greater public investment in our social services, in our health system; at a time when the students are crying for an increase of public expenditure on tertiary education, they are met with a cry that there is no money but the President is entitled to have spent for himself $19million over the next five years on this aircraft.

“Mr. Speaker, if anything demonstrates the need that has been consistently urged from this side of the House for us to review and prioritise public expenditure, this case justifies that call. I have no doubt, Mr. Speaker, that if the priorities are spelt out properly, the purchase of an Executive jet will come very low down on the scale of priorities.

“…Mr. Speaker, we have to express our displeasure at the manner in which the powers of this House have been subverted. Mr. Speaker, when we are saying these things, I know that in a matter of a jet, it is an emotional matter for Members of the Majority, especially since it concerns their all powerful President, Jerry John Rawlings and his comforts.

“…Mr. Speaker, by the grace of His Excellency, the all powerful President. Soon we shall be calling him His Majesty in this House, Mr. Speaker — at his grace. Mr. Speaker, we are saying that this transaction is a most unsatisfactory one.”

Ablakwa has been at the forefront of demands for transparency in travels of the president relative to cost and the lack of usage thereof of the presidential jet for overseas trips.

He has in the last three months revealed that three foreign trips by the president to Europe were aboard luxury jets chartered for as long as he was away. He said the travels had cost Ghana in excess of 10 million cedis.

Presidential spokesperson Eugene Arhin, has disputed the claims that the president flew on particular jets that Ablakwa mentioned but also tacitly admitted that those trips were not aboard the presidential jet.

Ablakwa’s recent revelation that Ghana’s jet was being used by the Liberian president elicited a response from the Foreign Affairs and Regional Integration Ministry.

The Ministry revealed that it was not just the Liberian leader but that those of Sierra Leone and Guinea-Bissau had also used it at a point.

In an October 1 post on his Facebook page, Ablakwa wrote: “Following confirmation of my assertions by Ghana’s Ministry of Foreign Affairs and Regional Integration; we must all be sincerely saluting and commending most highly the Presidents of Liberia, Sierra Leone and Guinea Bissau for not initiating steps to purchase their own “bigger” and “obscenely luxurious” presidential jets in the midst of a pandemic as one of their colleagues is now famous for.

“They are rather opting to share our presidential jet with us in the true spirit of Pan Africanism.

“Even more impressive, they do not appear disturbed by claims from government spokespersons that our Falcon isn’t that safe and fit for purpose (whatever that means).