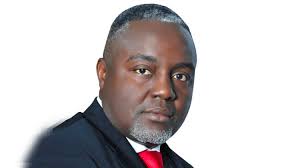 Share
A federal high court, Kastina Judicial Division, presided by Justice M. Shittu Abubakar, has struck out the application for exparte motion for an order, to direct the Independent National Electoral Commission (INEC) to receieve the name, details and documents of an Abia gubernatorial aspirant, Emeka Atuma, and the APC national senatorial electoral committee chairman in the concluded primaries for Abia central district, Haruna Abubakr Magaji, in respect to the outcome of the concluded senatorial primary elections held in Abia central district.
Recall that the leadership of the All Progressive Congress, an Abia 2023  gubernatorial aspirant, Hon Emeka Atuma, Mr Haruna Abubakar Magaji, and others, had on July 4, 2022 approached the federal high court in Kastina state to obtain an motion exparte order, praying for an interim injunction to restrain the Independent National Electoral Commission (INEC) from causing the applicants irreparable damages by directing the defendant to receive from the APC, the names, details and documents of the Emeka Atuma and Haruna Abubakar Magaji, herein, whether by opening its electronic platform or by receiving surface/hard copies of names, details and documents to temporarily conclude the nomination of Emeka Atuma and magaji as candidates of the APC, pending the determination of the motion of notice for interlocutory injunction.
The exparte motion was dated 4th July 2022, signed by seventeen persons as plaintiffs, and was filed by Abdulgani Arogo Esq with S.T Ayodele, Esq, of counsels for APC and Magaji.
The APC leadership served as1st defendant,  Chief Emeka Atuma is 2nd defendant, Haruna Abubakar Magaji also served as 17 defendant, and 14 oithers, while INEC is the defendant in the matter.
However, while ruling on the exparte motion for interim injunction by some APC members from Abia state and the party national headquarters, which Justice Abubakar-led federal high court in Kastina state, also ordered the applicants to serve INEC with the Motion on Notice which is already filed before the court.
A copy of the federal high court ruling was issued to newsmen on Thursday.
The court further ruled, “that however, in view of the fact that the matter relates to the forthcoming general election and in order to give effect to the Rule 1 of the federal high court direction on pre-election matter, 2022, and the applicant’s affividat of urgency, the 5 days given to the respondents INEC, by Rule 7 (7) of the aforesaid practice direction to file their counter affividat and written address, is hereby abridged to only two days with effect from the day of service”.
Also recalled that the latest development came on the background of the recent lawsuit filed by All Progressive Congress standard-bearer for Abia central Senatorial zone and winner of the concluded primary election, Hon Sam Onuigbo, had asked an Abuja High Court to restrain his party from substituting his name for the 2023 general election.
Onuigbo, who currently represents Ikwuano/Umuahia federal constituency of Abia State, sued the APC, the Independent National Electoral Commission (INEC) and Emeka Atuma as 1st, 2nd and 3rd defendants respectively over alleged substitution of his name with another name.
However, the Chief Judge of Federal High Court, Justice John Tsoho, transferred the suit to Justice Evelyn Anyadike of Federal High Court, Umuahia Division.
The plaintiff, in the suit, sought an order of court nullifying the unilateral substitution of his name as the validly elected candidate for that of Atuma, who he said never participated in the primary election of the APC for the Abia Central Senatorial District held between May 28 and May 29.
Onuigbo is also asking the court to nullify and set aside the election result submitted to Independent National Electoral Commission (INEC) on June 16, parading the name of Atuma as the candidate of the All Progressive Congress (APC) for the senatorial district.
The federal lawmaker equally sought court order mandating the APC and INEC to immediately include his name as candidate of the party, having emerged the winner of the poll, among others.
The Abia party chieftain, Sam Onuigbo who  had emerged the winner of the All Progressive Congress concluded  Senatorial primary election held in Abia central Senatorial district of the state,  frowned at the undemocratic practice by governing All Progressive Congress in Nigeria, wherein the party unlawfully  substituted his name to another person who did not purchase the APC senatorial expression of interest & nomination forms, nor participated during the indirect mode of senatorial primary election in Abia central district, and further maintained that the action by the party leadership negated democratic principle, urging the APC to include his name in the published lists of names of candidates that emerged from its concluded national assembly primary elections conducted across the federation, on the basis of mere directive from the national leadership, on harmonisation of interests by the members in Abia state.
He further queried why Mr Atuma who was a governorship aspirant on the platform of the All Progressive Congress, and lost to pick the party’s gubernatorial ticket at the recently-conducted indirect mode of primary elections for Abia central senatorial district and also, was never a senatorial aspirant for Abia central district during the concluded primaries could be awarded unmerited victory to an execrise he never purchased forms, appeared for screening, and participated in party primaries.
Recall further that, Hon Sam Onuigbo who currently is the member  representing Ikwuano/Umuahia federal constituency at the House of Representatives, was declared winner following a run-off election which took place in Umuahia on Sunday, 30th May, 2022.
The execrise was earlier on Saturday 29th May, declared inconclusive before conducted the run-off election.
Out of 318 accredited voters, he polled a total of 157 to defeat his close rival, Chief Henry Ikoh, who polled 152, and also, nine votes were voided.
CLICK HERE TO DOWNLOAD PRESS RADIO MOBILE APP

A co contestant for the Abia central Senatorial seat ticket of the APC, Senator Nkechi Nwogu, had before the commencement of the primary election, withdrew from the race. 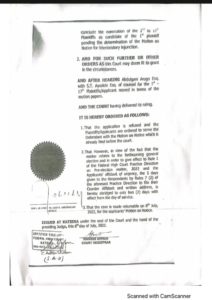 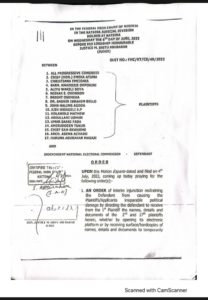