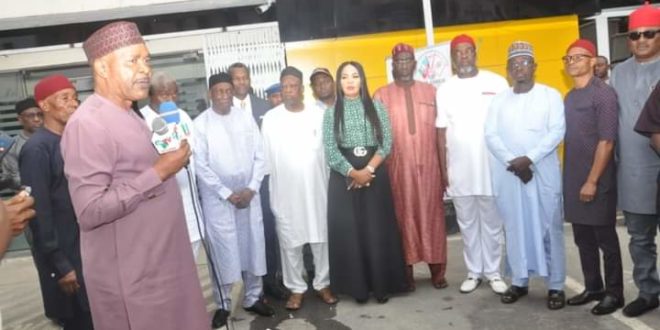 Share
It was indeed an uncommon and most truthful moment as  All progressives Congress peace and reconciliation committee meeting held at its National office Secretariat in Abuja 4th of August, 2022.
The meeting which was chaired by the National Chairman Abudullahi Adamu  amongst other relevant stakeholders and  party faittfuls across the States.
In a bid to strengthen internal democracy and forestall peace amongst aggrieved members of their party,  particularly the one that involves Abia State Primary election; where one imposter who could not adhere to a common directive of the party with regards to direct primary, proceeded to conduct a self imposed indirect primary just to cause confusion and create unnecessary disaffection amongst relevant stakeholders. He described such action as childish which often times is being perpetuated by Abuja politicians.
The National Chairman further stressed that such unsolicited shenanigans and public deceit should cease forthwith by those involved.
He emphatically said that only the  person who adhered to the party instructions and who must have passed through direct primary and who obviously has the mandate of the people can be our flag bearer.
The Chairman equally reckoned his  displeasure on Ikechi’s negative attitude towards him when he was the Chairman of reconciliation committee and vowed that such will never happen again.
He urged all Abians and party stakeholders to support the candidate of Dr. Uche Ogah as its authentic flag bearer in Abia State and jettison all other distractions.
CLCIK HERE TO DOWNLOAD PRESS RADIO MOBILE APP