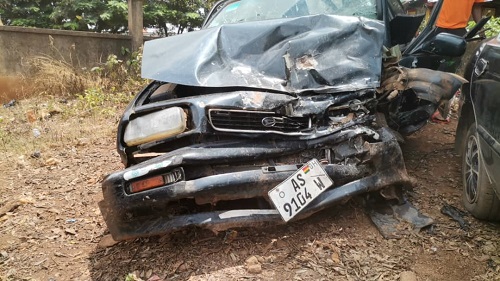 The two accidents which were recorded on Tuesday August 17, 2022 at separate locations in the region saw the victims sustaining severe injuries

The first accident occurred at Edwenease in the Kwadaso Municipality.

The accident which was as a result of a head-on – collision between two saloon cars was reported around 10:00 a-m on Tuesday August 16, 2022.

The pilot sides of both vehicles were destroyed trapping the two drives in the car after the accident.

It took about one hour for residents to get the victims off the car to hospital.

Three persons including one pregnant woman were send to Kwakye Marfo Hospital and are currently receiving treatment.

One of the victims, a heavily pregnant woman was also rushed to the Kumasi South Hospital for treatment.

The accident according to witness occurred after a saloon car with registration number GN 2642-11 lost control and crashed into a taxi cab on the Kaase – Ahowdwo road around 9:30 p-m.