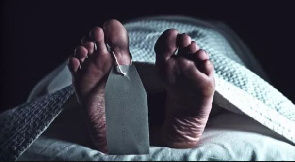 One of the two persons who drowned following torrential rains in the Ashanti Region on Monday, 20 May 2019, has been found.The remains of Kofi Appiagyei, 32, was recovered at Atonsu S-Line in the Asokwa Municipality.Recovery of the body was confirmed by the National Disaster Management Organisation (NADMO) Director for Asokwa Municipality, Mr Eric Akosah in an interview with Kumasi FM’s Elisha Adarkwah.Kofi Appiagyei, slipped and drowned in the flooded Pelele river at Asawase when he attempted to cross a foot bridge that links Dechemso and Asawase in the Asokore Mampong Municipality.The body of the 9-year-old Kroyisa Awudu who drowned at Tafo Zongo in the Old Tafo Municipality has still not been found.Rescue team is still on a search for the kid’s body.Monday’s rain that started around 3:30 p.m. and lasted for about two hours caused havoc to properties in Kumasi and displaced many people.Some of the areas flooded include Atafoa, Dechemso, Airport aroundabout, Kumasi central market, krofrom and Anlonga Junction, among others.Source: Ghana/ClassFMonline.com