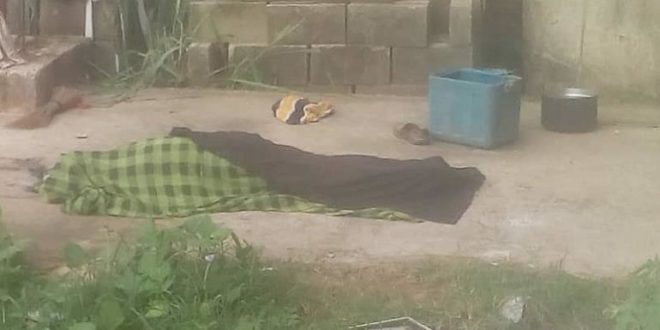 A man believed to be in his early 40s, popularly called Congo soldier, has been found dead in an uncompleted building at Atwima Aburaso in the Atwima Kwanwoma District of the Ashanti Region.

The lifeless body of Akwasi Boakye, aka Menamewoho, a native of the community was found in front of the building on Sunday, May 17, 2020 at about 7:00am.

A source indicated that a woman who lived close to the building saw the body and immediately raised an alarm which attracted several neighbours to the scene.

The Assembly Member of the Aburaso Electoral Area, Emmannuel Nyanteng, who was called to the scene, also called the Suntreso District Police to report the case.

The cause of Congo soldier’s death was not immediately known, but aggrieved residents who were at the scene suspected food poisoning.

The deceased who was lying in a prone position, had his right hand firmly held on to his stomach with food in his mouth, a suspicion that he might have eaten poisoned food.

There were also wounds on his face with blood stains at the scene. No arrests have since been made.

However, the assemblyman appealed to residents in the area, who had any information about the death of Akwasi Boakye, to contact him or the police.

Meanwhile, the body has since been deposited in a mortuary for autopsy.