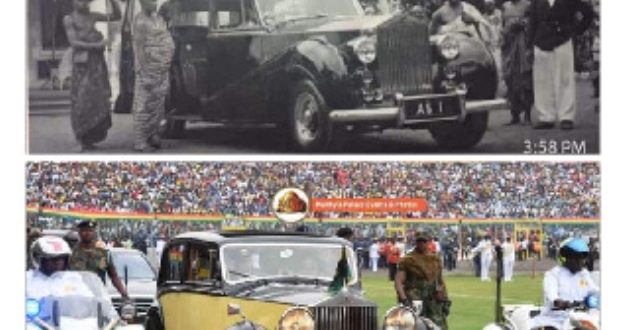 Share
During Ghana’s 63rd Independence Day parade held in Kumasi, the Asantehene Otumfuo Osei Tutu II graced the historic occasion in a Rolls Royce which became the centre of discussion.

It has emerged that the Rolls Royce was bought in the 1940s by the then Asantehene Otumfuo Prempeh II.

This was disclosed in a Facebook post by The Asante Nation, a public page with over 45K followers.

Currently, the Asantehene Otumfuo Osei Tutu II uses it as one of his ceremonial cars for state events.

He has decorated the 80-year-old Rolls Royce with the colors of Asanteman; Yellow, Black, and Green.

According to reports, the Asantehene’s Rolls Royce is known as 20/25. The model has been used by three (3) Asantehenes.

Otumfuo Osei Agyemang Prempeh II was the first to use it in 1935. According to an Asante historian Safo Kantanka, Prempeh II first used it during the durbar for the reunification of the Asante Confederacy in 1935.

After Prempeh II’s passing in 1970, he was succeeded by Opoku Ware II who used the car for 29-years. Osei Tutu II is thus the third Asantehene to use the car after succeeding Opoku Ware II in 1999.

Watch a video of his entrance to the Kumasi Sports Stadium during the 63rd Independence Day Parade below;