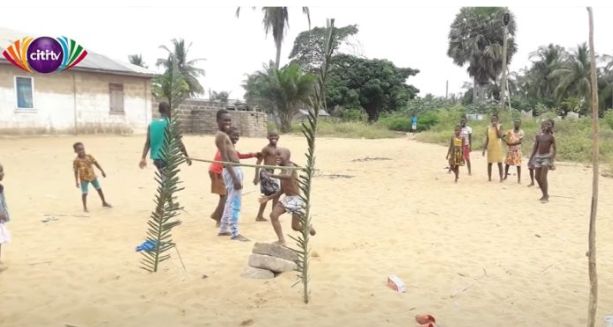 VIDEO: A look at local games that defined the Ghanaian childhood

Share
Let’s go down memory lane to some nostalgic Ghanaian games played in the past, which have since been eroding gradually from our localities.

How well do you remember some local games usually played in the 80s and 90s?

‘High jump’, ‘pilolo’, ‘chaskele’, ‘counters ball’, ‘sway’, ‘hopscotch’, ‘ampe’, ‘stay’ and many others were the games that kept children busy and active emotionally, mentally, and physically, in class and at home.

The evolution of technology has changed the way children play today.

Many are glued to their parents’ phones, and some even have iPads to enhance their knowledge.

The games in the 80s and 90s brought children together in the community playground to bond and learn different communal virtues.

But with the ICT tools used today, children are either in their rooms playing PS5 games or independently fidgeting with mobile phones, which typically come with less or no supervision from parents.

Back in the day, the high jump was one of the commonest games played by kids.

The poles were usually improvised with palm branches and a stick to cross.

‘Chaskele’, ‘pilolo’ and ‘four corners’ were also common, but it is hard to see kids in recent times playing such games.

Well, a teacher at the Whuti E.P Basic School in the Anloga District of the Volta Region is taking his class down memory lane to show them some of the games that defined Ghanaian childhood.

Citi News’ Fred Duhoe covered the games and has more in the video below: