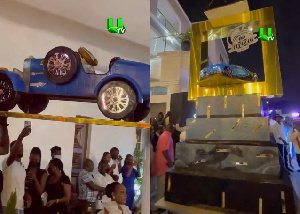 Despite flies to hometown to celebrate with residents

Widows receive donation from Despite

The 60th birthday of business mogul Dr. Osei Kwame Despite was one that was characterized by spectacular opulence beginning from a trip from Accra to his hometown, Wiamoase, via a chartered flight.

Accompanied by members of the East Legon Executive Fitness Club who donned white long sleeves with black pair of trousers and shoes to match, alongside some prominent figures who could not miss the epic moment, the celebrant commemorated his birthday with a magnificent display.

Of course, the day would not have been complete without the cutting of cakes.

The first cake, a customized one, was cut during the day. Placed on a neatly designed table was a six-tier long cake which had pictures of Despite and the ‘Gye Nyame’ adinkra symbol embossed on it.

Sitting atop the cake was his age with a wine glass placed in the middle of the ‘0’ in the ‘60’, representing celebration.

Looking different after growing his beard, Despite was joined by friends from East Legon Executive Fitness Club as he cut the cake amid singing. That was just a tip of the iceberg!

The second birthday cake, touted as the biggest and longest birthday cake in the history of Ghana was cut during the dinner. It was designed in the form of a car. The third one was a 9-tier cake with a rectangular golden plated bar in the middle which had a Bugatti resting in it.

According to Abeiku Santana who was the MC for the occasion, Fadda Dickson was the brain behind the cake. The decision to have a cake of that kind is as a result of Despite’s admiration for exotic cars, Abeiku explained.

On the occasion of his birthday, the Despite Group of Companies boss unveiled two-storey buildings he had constructed for his sisters. He also donated an amount of GH¢100,000, other items to widows in Wiamoase.

Speaking on behalf of Despite, his confidant, Dr Ofori Sarpong noted that the money is to be shared among widows in the various religious groups.

“Today, February 2 marks Dr Osei Kwame Despite’s 60th birthday. He is wholeheartedly making these donations to churches and widows in this town. These go to the widows in the various churches and Muslim communities in Wiamoase.