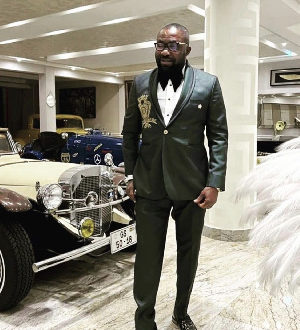 ‘A linguist can’t interview his own chief’ – Despite tells blogger

Despite uses proverbs in interview

It was a good day for a blogger who was able to grab the attention of Dr Osei Kwame Despite for an interview but what came next for sure wasn’t expected.

In a proverbial response, the owner of the Despite Company Limited who does not grant interviews told the unidentified blogger in Twi, to wit, a linguist or a spokesman cannot interview his own chief because he has employed him to speak on his behalf.

“If an Enkenkensu player, kicks from the corner, he goes to score by himself. If you interview me, then you are talking for me,” he politely told the blogger who asked him to say something to the camera

The Ghanaian millionaire, Osei Kwame Despite, held a massive birthday celebration to mark his 60th birthday.

This event was a sight to behold when the rich and influential people from Ghana made it from their various locations to the lavish birthday bash.

With music, dance, some food and a bit of networking, it was a joyous occasion that welcomed top politicians, media personalities, influencers, businessmen, artistes and many others to celebrate with him under one umbrella.

Previous Why is E-levy all about the money; what about the people? – Shatta Wale blasts government
Next Let’s tackle coups before things get out of hand – ECOWAS Chairman