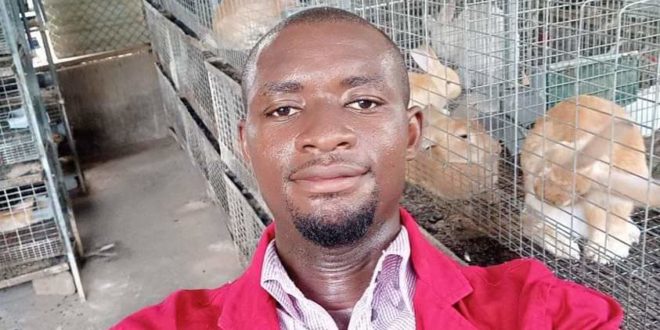 Share
Nowadays, young men and women are more interested in professional jobs like; Banking, being Doctors, engineering amongst others and make a spectacle of farming as jobs reserved for illiterates.
Well, the story is changing by the day, Mr. Harrison Addison is an Accountant who graduated from UPSA. He is now into Agribusiness.
He is the CEO of “The Rabbit Masters”  located in Oyibi, a suburb of Accra.
Born to Ghanaian parents in Ho the capital of the Volta region. Mr Addison has been in Agribusiness (Rabbit Farming) for 10 years.
Accounting was a career he wants to pursue, but after his tertiary education, getting a job was a difficult task.
“I wanted to work as an Accountant, that has been my dream, however, after school it was hard getting job opportunities, I decided to do something on my own to earn a living. So farming was the first thing that came to mind”. He stated.
“My parents are farmers, so I have some knowledge about it. I decided to go into Rabbit Farming because it was rare”
When asked how sales are made, he said there is a kitchen which supplies grilled rabbit meat, sauce, pizza and Fresh meat.
” We also supply live Rabbits if ordered. And many people don’t know that rabbit meat is the best when it comes to Low fat.” He said.
According to him, farming is not a poor job as we see it, but very profitable when managed well.
“The Rabbit business has helped me a lot and I have branches. My advice to others out there struggling for a job is that the mentality about farming should be changed. Let us be the businessmen and women to help improve the economy of this country.” He urged.
Source: Thepressradio.com/Angela Amuzu
Accountant Agri - Preneur GRADUATE Turned 2021-03-09
admin
Share