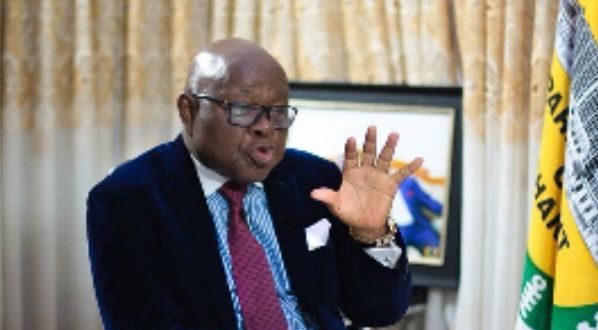 Prof Oquaye says there is no need for that conversation

Former Speaker of Parliament, Prof Aaron Mike Oquaye has added his voice to the recent discourse on military takeovers in the political and civil society space.

According to him, there was no need for such conversations especially at a time Ghana continued to incrementally build and bind its democratic credentials since the birth of the Fourth Republic.

His views were contained in an article published in the media, in which he spells out his motivation to comment on the issue.

“This writer feels compelled to write this piece, being a student of the military in politics – a task I set myself to for decades.”

He cautioned about the many downsides of military interventions stating that the best junta was no where near the worst democratic government because of the excesses that come with the latter’s dabbling in political governance.

“Categorically speaking, military intervention is NOT an alternative to civilian regime performance, no matter how abysmal.

“The democratic determination of political preference after political mandate has been given to a political party is by one mechanism ONLY – the Ballot. A nation is either democratic and abides by this practice or it is unfit to be counted among the comity of civilised nations. You cannot serve God and mammon.

“You cannot have a Constitution adopted by the people and yet any time a section of the populace disagrees with policies being pursued, a coup or military take-over occurs,” he stressed.

He cited several instances in recent history where under the Jerry John Rawlings-led AFRC and PNDC juntas, several excesses were recorded and yet remain unresolved till date.

Prof Raymond Atuguba – Dean of the School of Law at the University of Ghana – in a recent lecture averred that Ghana maybe rife for a coup considering the prevailing economic challenges.

He stated that certain conditions for a successful coup to be staged such as a broke economy were already in place. He advised the government to immediately begin addressing such eminent threats before it escalates.

“We do not want a coup in this country yet I fear that if we do not act quickly, we may have one on our hands very soon. A former colleague doctoral Ph.D. student wrote his dissertation also on Ghana.

“Naturally, our paths intersected and we have remained friends since. My friend’s Ph.D. thesis was on the topic ‘Why certain coup succeed and why others fail’. His case study was Ghana.

“My current assessment that Ghana may be ripe for a coup partly springs from the knowledge I gained from accompanying my friend through part of his doctoral research on this topic.”

Since his comment, there have been growing calls for his arrest.

Previous Loneliness forced me to sleep with 8 year old – Man confesses
Next VIDEO: The story behind Shai Hills’ baboons and how they came to be