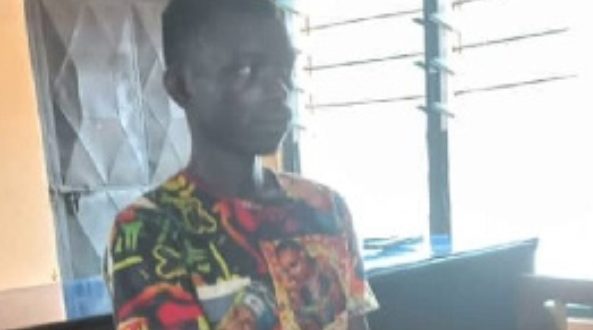 Share
The West Mamprusi Municipal Police Command has arrested a 26-year-old young man for allegedly abducting a 5-year-old schoolgirl who had gone missing on the 21st of February 2022 in Walewale.

The disappearance of the child had caused fear and panic as parents were threatened to stop their wards from attending certain schools in the Municipality.

The suspect, Solomon Awumbriga, 26, was arrested on the 18th of March 2022 at Mirigu in the Kasena-Nakana municipality of the Upper East Region following the circulation of the images of the missing child on the media after her disappearance.

According to the police, the suspect (Solomon Awumbriga) on his arrival at home with the child, was questioned by his relatives about who the child is and where she is from.

But the suspect told his relatives that he has a wife who is living somewhere outside the Upper East Region and that is their daughter he has brought home for them to know.

The North East Regional Police PRO, Robbert Annabik revealed to GhanaWeb that the mother of the suspect had warned him that if he fails to get a woman to produce grandchildren for her before she dies, then he should not come to her funeral.

“Our investigations so far revealed that he met the child returning from school and lured her that he was taken her to her mother but boarded a vehicle and took her to his village called Mirigu.

“So far, pieces of information we picked indicate that the mother of the suspect warned him that if he does not produce a child for her and she dies, he shouldn’t come to the funeral. Maybe that engineered him to do what he did but we are still investigating,” he said.

He also confirmed that the 5-year-old child is in good condition and handed her over to the parents after she was sent to the Walewale Municipal Hospital for a check-up.