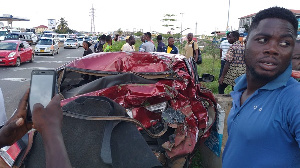 Five persons are in critical condition after six vehicles collided at Awoshie in the Ga Central Municipality in the Greater Accra Municipality.

The accident, according to TheGhanaReport occurred, after a tipper track rammed into the vehicles, and also hit a motor rider along the stretch.

Narrating the incident to the website, an eyewitness by name Isaac Asumang said that the over-speeding truck with registration number GT 6554-19 could not pull the breaks on his speed when he got to the Awoshie Last Stop.

A NADMO official at the Ga Central Municipality, who also witnessed the accident said “with the speed of the truck, I suspected that the break had failed. The driver kept honking but the traffic light had turned red and the vehicles ahead had stopped.

“An Accra-bound Sprinter managed to swerve onto the pavement but pedestrians suffered a minimal hit. In the process of the confusion, an Okada rider smashed his motorbike into the commercial Sprinter bus and fell off the motorbike”.

“He passed out immediately and his unconscious body laid on the street for some minutes,” he said.

The injured persons are receiving treatment at the Ga South Hospital after sustaining various degrees of injuries.

A GPRTU personnel pwho spoke to TheGhanaReport confirmed the number of injured victims but could not state if there were casualties.