Home / POLITICS / 4 ‘sins’ under Mahama that have worsened under Akufo-Addo, Bawumia 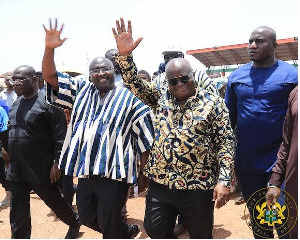 4 ‘sins’ under Mahama that have worsened under Akufo-Addo, Bawumia

Before they won the hearts of Ghanaians, both President Nana Addo Dankwa Akufo-Addo and his vice, Dr. Mahamudu Bawumia, on numerous occasions made promises of hope while on their campaign platforms.

Usually doing so in comparison with the administration of the former president, John Dramani Mahama, which they described as incompetent, there was optimism that the New Patriotic Party duo had better options for Ghanaians at the time.

Five years down the line, and in their second term as president and vice president, how fulfilled have the voters been of their performance? And, have all their promises been fulfilled to the satisfaction of the citizenry?

GhanaWeb segments some of the famous promises President Nana Akufo-Addo and/or Dr Bawumia made to Ghanaians before winning power, but which they have more or less worsened.

During one of his campaigns, President Nana Addo Dankwa Akufo-Addo gave his usual assurances to the crowd gathered, promising them that should he become president, he would, among other things, ensure prices of fuel are drastically reduced.

“When I get power I won’t turn my back on you, I won’t make a promise I can’t fulfil, and I will also reduce the price of petrol,” he said in the local language Twi.

Meanwhile, since February 1, 2022, consumers of petroleum products have been paying more at various pumps and it won’t be the first major fuel price increment in this administration.

This comes after the National Petroleum Authority (NPA) re-introduced the Price Stabilisation and Recovery Levy (PSRL) which is a key factor in the Fuel Price Build-Up.

The Head of Pricing at the NPA, Abass Tasunti, explained that the move is necessary in order to enable the regulator to subsidise premix fuel for the fisherfolk in the country.

“The three months period that it has been taken off, nothing has gone into the account and we’ve been using the balance we have in the account over this period to pay for this subsidy.

“…As we speak, the account is dry so if we remove it forever or we continue zeroing the levy, it means that we will not have money. The continuous supply of premix oil and residual fuel will be threatened which we do not want to happen so unfortunately for the consumer, it [the levy] has to come back,” he said to Citi Business.

Ahead of the polls in 2016, Nana Addo Dankwa Akufo-Addo and Dr. Mahamudu Bawumia accused the John Dramani Mahama administration of reducing the essence of governance to borrowing.

Dr. Bawumia claimed that an unprecedented amount of money had been spent by the NDC government which was in power at the time, with very little to show for it.

“In the last six years, the NDC has borrowed US$27 billion. Before that, we, the NPP, borrowed a total of US$5.5 billion in eight years. Compare that to the NDC borrowing $27 billion in six years and ask yourself what have they done with all that money.

“NDC inherited a public debt stock of GHS9.5 billion in 2009…Today, Ghana’s debt has gone up to GH¢65.7 billion. So, when I say the stakes are high I am talking about the destiny of our country, Ghana, the future of the youth,” he stressed.

Before he left office, it was estimated that Ghana’s total debt stock as at 2015 was over 94.5 billion Ghana cedi, about 70.9 per cent of the country’s gross domestic product, drawing analysts to conclude that the country had crossed the highly indebted poor countries threshold.

Dr. Bawumia also claimed that about 66% of Ghana’s total debt since independence had been accumulated under President John Mahama, adding that this was as a result of the mismanagement of the Ghanaian economy and “reckless” and “unbridled” borrowing.

He also noted that Ghana’s total debt had ballooned from GH¢9.5billion to GH¢105 billion at the end of May 2016.

Today, under the presidency of Nana Addo Dankwa Akufo-Addo and Dr. Mahamudu Bawumia, the country’s total debt stock, after five years of their tenure, is GH¢344.5 billion as at November 2021.

Dr. Mahamudu Bawumia is the head of the government’s Economic Management Team.

Ahead of becoming vice president, he was very vocal about taxation and matters of the economy, usually punching holes in the performance of the John Mahama administration.

In a tweet he made on November 2, 2017, Dr. Bawumia said his government will move the economy from one of taxation to technological advancement.

“In Ghana we’re moving the focus from taxation to production, taking advantage of technology,” he tweeted.

Dr. Bawumia also explained on the assumption of office, the current government abolished some fifteen taxes in order to reduce the burden on businesses and individuals.

However, since this government took office, it has also introduced quite a number of taxes that have courted a lot of public rejection.

In the 2022 Budget Statement and Economic Policy, the Nana Akufo-Addo government has submitted another series of taxes.

They include a 1.75% Bank Transfer tax and 1.75% internal remittance tax, a 1.75% (digital) tax on all electronic transactions (E-Levy), 15% increases in fees from charges of government.

When he was leaving office in 2017, the dollar rate in Ghana under John Dramani Mahama was GH¢4.30.

Dr. Mahamudu Bawumia, in his usual confident commentaries on economic matters, stated that his government had arrested the depreciation of the Ghana cedi.

Today, under the presidency of Nana Akufo-Addo and Dr. Bawumia, five years after, the dollar is at GH¢6.36%.