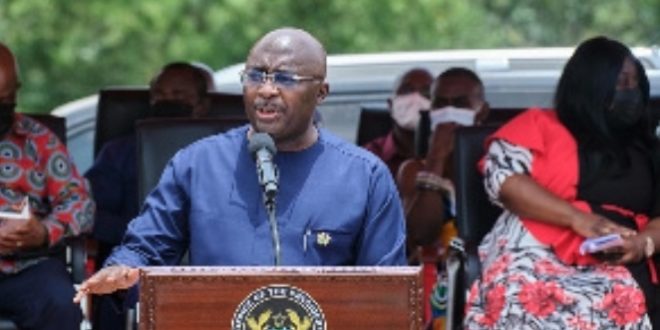 Share
There have been several calls on Vice President Mahamudu Bawumia to speak on the state of Ghana’s economy on the back of growing hardships.

The Vice President with a rich background in economics had on various occasions during his opposition days, made statements which are now being recalled by some Ghanaians.

GhanaWeb lists some of the Vice President’s pronouncements which have become points of highlight in recent days:

In the lead up to the 2016 elections, then running mate Dr Bawumia taunted the then Vice President, late Paa Kwesi Bekoe Amissah-Arthur with some 170 questions on the Ghanaian economy under the erstwhile John Dramani Mahama administration.

Godsbrain Captain Smart, the host of Onua FM’s breakfast show recently demanded answers from Dr Bawumia to the 170 questions he set for his predecessor.

The broadcaster believes the answers could save the economy from its current woes.

Captain Smart requested that Dr Bawumia who in his view is pontificated as an Economic Messiah in the lead up to the 2016 election emerges to speak up on the issues he raised on those occasions.

Captain Smart views the set of questions as a secret to unlocking Ghana’s economic potential and that the man who crafted them whiles in opposition should be able to implement them now that he is in government.

“He who calls for equity must come with clean hands. We want him to answer these questions for us. He complained about the GDP under Mahama, what’s the GDP now. Whatever goes around, comes around. Mahama experienced Ebola and he is experiencing COVID.

“Economic crisis hit the Kufuor government but he dealt with it because he was sensible. There is oil growth and they claim the economy is growing so why is the dollar rising. The fundamentals are now stronger than the beds of sex workers but still exchange rate is exposing them,” Captain Smart said on his show.

Then running mate Dr Bawumia posited on several media and campaign platforms that the questions represented the ills of the management of the economy by the Mahama government and that the answers by Amissah-Arthur could help understand the perceived struggles of the economy.

In the lead up to the 2016 elections, Dr Bawumia a then running mate for the New Patriotic Party couched a rhetoric which he again used to taunt the then government over the management of the economy.

Dubbed “Ghanaians are suffering”, Dr Bawumia on several campaign platforms listed various categories of Ghanaians whom he stated were bearing the brunt of the mismanagement of the economy by the then NDC government.

Five years after being in opposition, the National Democratic Congress which is currently the minority in Ghana’s Parliament has re-echoed Dr Bawumia’s “Ghanaians are suffering” rhetoric.

The minority recently made calls for the dissolution of government’s Economic Management Team led by Dr Bawumia, citing incompetence in dealing with the challenges facing the country.

“This government has been a monumental failure. We call on President Akufo-Addo to dissolve the Economic Management Team because they have not lived up to expectation,” the Minority Spokesperson on Mines and Energy, John Jinapor told a press conference in Parliament.

“The exchange rate – the dollar to cedi is trading at 8.5 Ghana cedi. The Ghanaians cedi today is the worst in terms of performance with other major currencies. The price of diesel at the pump is over 40 cedis per gallon. That is the true state of the economy today. Workers, teachers, drivers, MPs, and market women are really suffering,” Mr Jinapor retorted.

‘The dollar has arrested Dr. Bawumia, we can’t find him’ – John Mahama mocks

After vehemently criticizing the John Mahama administration for failing to deal adequately with the depreciation of the Ghana cedi against the dollar, Dr Bawumia after assuming office announced the arrest of the dollar.

Dr Bawumia, giving account of the first 100 days of the President Akufo-Addo administration said “When we came in, it [cedi] was running, essentially we have arrested it [cedi], and the IGP has the keys, he’s locked it up, we want to make sure we pursue sound policies to keep the cedi stable, it has appreciated for this year.”

Five years down the line however, former President John Dramani Mahama on the back of the current events has stated that it is Dr Bawumia who has rather been detained by the dollar.

“Daily price increases, fuel price adjustments and nose-diving currency which has rather arrested the person who said he had arrested it. The dollar has rather arrested him. We will ask the IGP if he has the key so that we could find where our Vice President was,” Mr Mahama speaking at the launch of the TEIN App held at the UPSA Auditorium on Monday, March 21, 2022 teased.

Meanwhile, the Finance Minister, Ken Ofori-Atta is expected to announce measures outlined by government to mitigate and navigate the current economic crisis.