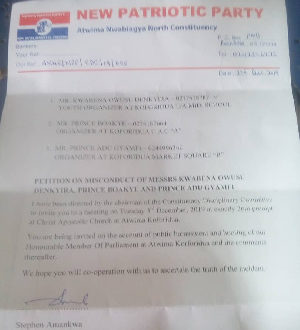 Three(3) Executives of the New Patriotic Party (NPP) in Atwima Nwabiagya North constituency of the Ashanti Region have been suspended for hooting at the Member of Parliament (MP) for the area, Hon Benito Owusu Bio.

They were said to have misconducted themselves and therefore found guilty by the disciplinary committee according to a letter dated 29th November, 2019 and signed by Isaac K Dawuni the constituency secretary

It would be recalled that Hon Benito Owusu Bio was last month humiliated, hooted at and chased out of a gathering by youth belonging to the NPP.

The Deputy Minister for Lands and Natural Resources had gone to Atwima Koforidua, a town in his constituency to engage members of the community and to also inspect a piece of land that has been earmarked for the construction of a police station when the incident happened.

The youth group, who were spotted in a video cursing and hooting at the MP vowed to unseat him should he attempt to run for the seat again.

They say there is nothing to show for the four terms that Mr Owusu Bio has been in Parliament and would no longer tolerate empty promises from him.

Leader of the group and founder of ‘NPP NTI NA Y3REBR3 YI FUN CLUB’, Yaw Borgor who confirmed to organising the hooting brigade said in an interview on Kumasi-based Angel FM monitored by MyNewsGh.com that, “we will hoot at him anywhere we meet him because he has not done anything for our town since he went to Parliament; we want jobs, we don’t want our children to suffer like we are doing, so Benito should give way for another person to come”.

But the NPP Youth Organiser for the Atwima Nwabiagya North Constituency, Prince Appiagyei told Angel FM that, the youth had been rented by “some people to stop the construction of the proposed police station in the town because they don’t want to see the progress of the town”.

He said it is not true that the MP has done nothing in the town; “at least he has built a toilet facility for them. I know also that he has donated some bags of cement towards the construction of a school building in the town”, he said.

Commenting on the development, a senior lecturer at the Department of Political Science at the University of Ghana, Dr Owusu Mensah said the action of the youth meant the “game is over” for Benito Owusu Bio. 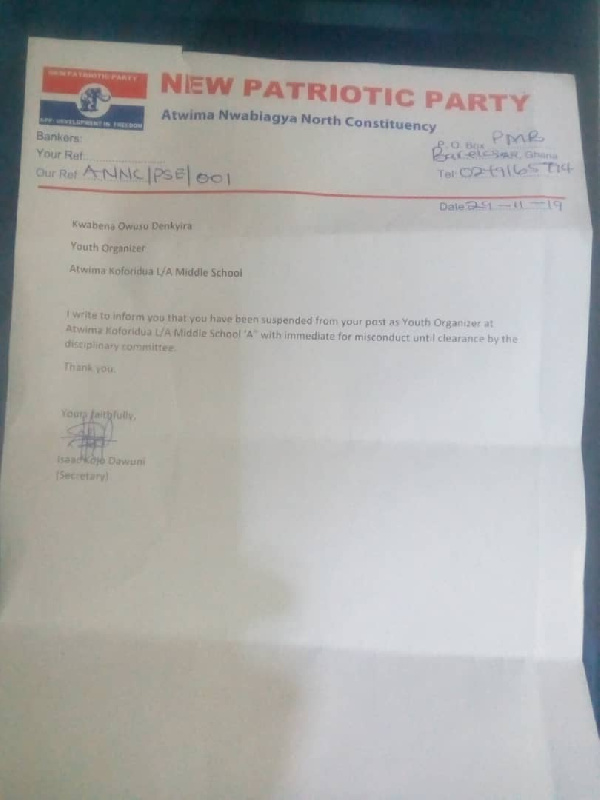