Home / GENERAL NEWS / 3 injured, many homeless after rainstorm at Kalba 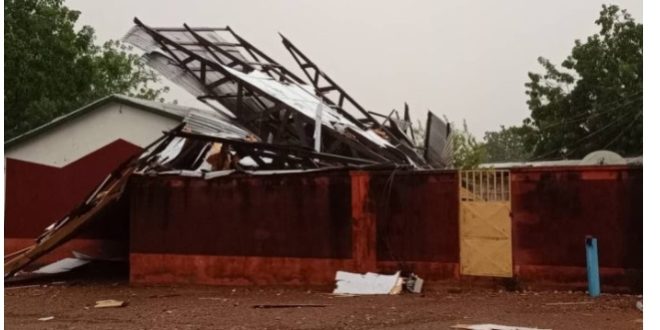 3 injured, many homeless after rainstorm at Kalba

Share
A rainstorm recorded at Kalba in the Sawla District of the Savannah Region has injured three children and displaced scores.

The storm, the first rainfall in 2022, also destroyed the only health centre situated in the heart of Sawla.

It is reported that the injured were struck by a collapsed wall and were rushed to the Kalba health facility.

In Charge George Kachiir Sobitey told Adom News’ Rebecca Natomah that the roof of their health centre was ripped off, and they struggled to get their tools together, before any treatment could be administered to the children.

Mr Sobitey, who doubles as the assemblyman for Kalba, said the 40-year-old hospital has never experienced any renovation, causing it to succumb to the rainstorm.

He indicated that the hospital is also a referral centre, and patients who travelled from neigbouring communities were stranded when the rains began.

Currently, the displaced residents and patients have been tasked to cohabit with friends and families.

Mr Sobitey appealed to the government to come to their aid.