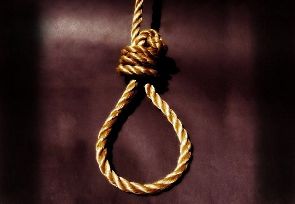 A 22-year-old man Andrews Osafo has taken his own life at Nsawam in the Eastern Region.

The graduate of the Nsawam Senior High School hanged himself on a ceiling fan on Thursday.

Mother of the deceased, Vida Osae narrated to Kasapa News Bonohene Baffuor Awuah that she left her son at home for the market early morning as she normally does.

She said later in the day she went on WhatsApp and realized that her son had sent a sad message in which he had mentioned a lot of people asking them to forgive him if he had offended any of them, and ended with the message “Mum I love you die”.

She suddenly became alarmed and tried calling him on phone but the phone was switched off. Her apprehension heightened which made her rush home to find out what might be happening.

Upon reaching home, she found out that the door had been locked which made her think her son might have gone out.

Madam Vida Osae said she then decided to open the door with a spare key and to the utter shock of her life, she found her beloved son hanging dead on a ceiling fan.

A report was filed with the Nsawam Police who came and conveyed the body to the Police Hospital morgue.