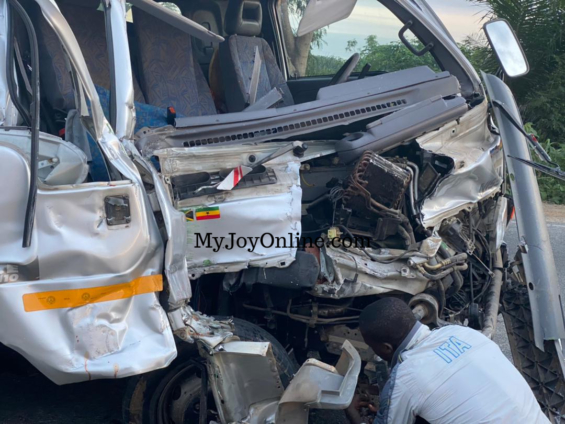 At least 22 passengers have sustained various degrees of injuries in a near-fatal accident on the Suhum stretch of the Accra-Kumasi Highway at Densuso in the Eastern Region.

The accident involved a sprinter bus from Accra with registration number AC 435 -20.

According to reports, the speeding vehicle with passengers aboard burst tyre, and in the process, the driver lost control of the steering wheel and crashed.

The victims including the driver are receiving medical treatment at the Suhum Government Hospital.

Meanwhile, three persons are in critical condition in another near-fatal accident at Akyem Tafo in the Abuakwa North Municipality.

The accident occurred when a speeding Toyota Corolla with registration number GB 3547-21 crashed into a shop on the Akyem Old Tafo stretch of the Bunso-Koforidua Highway after the driver was crossed by a Tricycle.

The three victims all male adults aboard the vehicle sustained injuries and were rushed to Osiem Hawa Memorial Saviour Hospital where they have been admitted.

The Toyota vehicle was speeding from Koforidua towards Suhum but attempted to swerve a tricycle that was making a illegal U-turn on the road but lost control of the steering wheel, veering off the road, and rammed into a metal container shop at the roadside.

Fortunately, the shop was closed, hence nobody was inside.

A joint team of Police and NADMO officials arrived at the scene to rescue the victims to the hospital.