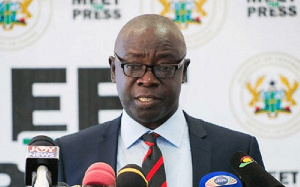 214 seized excavators cannot be accounted for by Lands Ministry

Kwaku Asomah Cheremeh, the Minister for Lands and Natural Resources has said that the Ministry has currently 157 seized excavators in its possession.

According to him, following a Cabinet decision in March 2020, his Ministry took direct responsibility to streamline and manage small-scale mining activities by taking an inventory of various equipment seized by the Inter-Ministerial Committee on Illegal Mining (IMCIM) and “Galamstop”.

“The Ministry has toured a number of locations to take inventory of this equipment, especially excavators. This exercise has resulted in the sighting of 157 excavators currently located at the following sites: Adenta-122, Obuasi-26, Tarkwa-9, making a total of 157,” Asomah Cheremeh explained at the Information ministry’s ‘Meet the Press’ on Wednesday, October 21.

Asomah Cheremeh further noted: “My Ministry is working to reconcile these figures which were hitherto given by Operation Vanguard and Galamastop, and develop a database to assist in managing this equipment. But for now, this is what we have counted at the sites mentioned.”

The Minister then threw a challenge: “Anybody who doubts what I have said on this missing excavator matter should bring the chassis and registration numbers; we will gladly welcome them and carry out a full-scale investigation into it.”

Prof. Kwabena Frimpong-Boateng, the Minister for Environment, Science, Technology and Innovation, in January disclosed that some excavators seized from illegal miners by the Operation Vanguard and Galamstop teams had vanished.

Some six-persons, including Ekow Ewusi, the Central Regional First Vice Chairperson of the incumbent New Patriotic Party, were arrested in connection with the missing excavators.

Ekow Ewusi’s role was to transport excavators and other vehicles and pieces of equipment seized by Operation Vanguard to designated areas for safekeeping.

Seven of the excavators were later retrieved during an operation by the Inter-Ministerial Committee against Illegal Mining (IMCIM).

Previous US Election 2020: Trump and Obama lock horns in rival rallies
Next Gov’t to expand economy with iron, steel