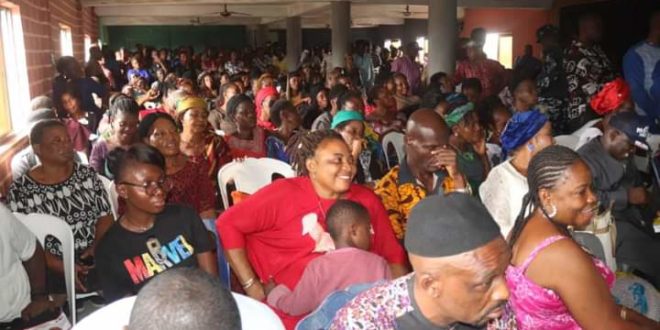 Share
The governorship standard-bearer of the Action Peoples Party in the forthcoming 2023 general elections in Abia State,  Chief Mascot Uzor Kalu, has recieved hundreds of  defectors from All Progressives Congress  and Social Democratic Party into the fold of APP in the state.
The hundreds of defectors were led into the Action Peoples Party by APC Secretary in Aba South Local Government Area of Abia state and Assistant State Secretary of SDP, Hon Ahuruonye Onyinyechukwu respectively.
However, while adducing the rationale behind the recent movement of the opposition  members to the Action Peoples Party during their separate speeches at the concluded verification tour of Aba North Local Government Area of the state by APP governorship standard-bearer, the leaders of the Abia defectors, said their conviction to join Action Peoples Party was propelled by the antecedents of Mascot Uzor Kalu.
Words: “we did not see any headway in where we where was and had not seen any credible candidate to give my allegiance to.
“But when i was told about Mascot and his antecedents, we decided to loin forces with the APP”.
The SDP, APC defectors also promised that they would convert the State Secretary of the Social Democratic Party to an APP member very soon.
On his part, Chief Mascot Uzor Kalu, the Abia gubernatorial standard-bearer of the party, Chief Mascot Uzor Kalu, flanked by his running mate, Prof. Osondu Akoma, welcomed the APC and SDP defectors into the fold of Action Peoples Party (APP) in the state.
The frontline politician also lauded the courage and bold steps taken by the decampees to pitch tent with APP, maintaining that the party possesed the requisite capacity and needed competences, and as well the expertise to rewrite the narrative in the governance of Abia state when elected to mount the seat of the Governor of Abia state come 2023.
Mascot used the medium to ask members of the Action Peoples Party in the state and other umbrella bodies and campaign organization at his disposal to form a strong alliance and work together for a common goal.
He further asked the executive members of the party at the respective local government area levels of the new defectors to make sure they are accommodated in the party and fully participate in the electoral activities of the APP,and reap the benefits thereof when the time comes.
Similarly, the APP gubernatorial-standard bearer, Mascot Uzor Kalu has pushed further his bid to become the governor of Abia state come 2003 as he’s currently embarking on Verification tour of the seventeen local government areas in the state to assess the preparedness of the APP for the upcoming elections in Abia state and to examine the growth of the party by the governorship candidate.
CLICK HERE TO DOWNLOAD PRESS RADIO MOBILE APP

The verification tour, which kicked-started yesterday, is to assess the preparedness of the party for the upcoming elections in the state and as well as examine the growth of the Action Peoples Party at the local areas.
Source: Thepressradio.com|Nigeria| Emeruwa Chijindu Emeruwa
APC secretaries dumped parties for APP in Abia SDP 2022-09-07
admin
Share