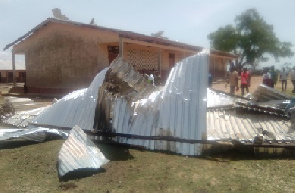 2 killed by rainstorm at Sherigu-Basungo

Two persons have been reported dead at Sherigu-Basungo in the Kassena-Nankana West District of the Upper East Region, following the recent rainstorm that hit the area last Tuesday.

Mr Azabire Aloo, 50, and Mamunatu Fuseini, a five-year-old primary school girl, died when a house in which they were, collapsed.

The District Chief Executive (DCE) for Kassena-Nankana West, Mr Gerald Atuogya, accompanied by staff of the National Disaster Management Organisation (NADMO) and journalists, visited Sherigu-Basungo to ascertain the extent of damage to property.

He asked the staff of NADMO to collate the number of buildings and victims affected by the storm, for assistance.

Mr Atuogya said the number of casualties could rise since other communities in the district were yet to report any disaster, and appealed to philanthropists and well-meaning Ghanaians to assist the affected schools and victims.

He appealed to the Northern Electricity Department (NED) of the Volta River Authority (VRA), to as a matter of urgency, replace high tension electricity poles that were destroyed by the rainstorm.

Mr Atuogya also said schools in the area lack furniture adding that the furniture deficit was 1,600, but the assembly had provided 800 furniture.

He attributed the ripping-off of some school buildings to poor execution of work by contractors, and asked citizens to monitor projects.

Mr Atuogya warned contractors to desist from shoddy work, because the Works and Engineering Department of the assembly would conduct unannounced supervision and monitoring of projects.