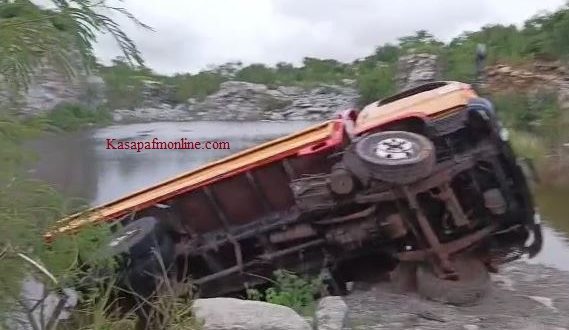 A fourteen-year-old girl has been crushed to death by a water tanker at Gomoa Asarekrom in the Gomoa East District of the Central Region on Friday.

Information gathered by Kasapa News Yaw Boagyan indicates that the deceased, Atta Kakra together with her twin Sister Ata Panyin was said to have been swimming in an abandoned stone quarry pit when the water tanker which was transporting water from the site failed its brake and run over them.

The water tanker run over her and stopped on her head in the water forcing her brain to gash out.

Following news of the crush, some residents rushed to the incident scene and retrieved the deceased from the water while her surviving twin sister who was injured was rushed to the Gomoa Buduburam Hospital.

The body of the deceased has been deposited at the Winneba Special and Trauma Hospital Mortuary.

The case has also been reported to the Gomoa Buduburam police station for an investigation.

No one has been arrested.

Meanwhile, residents say they have reported to the appropriate authorities to ban people and vehicles from collecting water from the pit as it poses a great threat to their lives but nothing has been done about it.