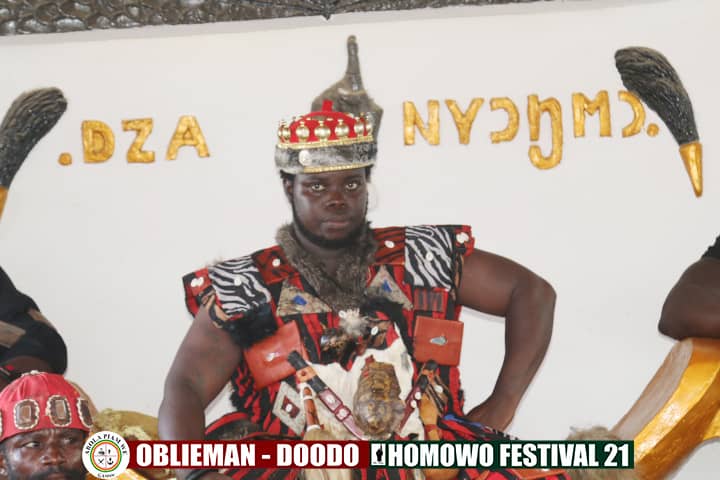 Nii Ayitey Anumle Oyanka, a King and Traditional Ruler under the Tunnmma Royal Dynasty of Abola Piam GA State and Anamase Royal Kingdom of Akyem Bosome Traditional Area has made history by becoming the first King to design his own Royal Traditional currency or notes which were filed and approved on 2021 1:25:16 PM with filling details:

These traditional, historic, royal notes have been printed in the United States of America and been put  into commercial trade in the United States. No King has or individual has ever printed money and used it Internationally, only governments have done that. The “GLU” or “Gold Land Unit” note was created on the Bitcoin and Counterparty Blockchains and approved by both the Abola Piam and Anamase Royal Councils on June 26, 2021. It must also be noted that not quite long ago King Oyanka through Nii Adama Djata solidified relationships within 5 different countries worldwide and now has secured over $700,000.00 under robotic management which will yield a 10% bi-weekly revenue of all profits made within the management accounts.

What makes this banknote unique or valuable?

These physical notes are the first blockchain controlled banknotes that have been accepted into commercial trade. Meaning, each note can only be used by holders who also have the respective token that authorizes their ownership. This is a mandate that is required by any merchant or organization that will accept the notes in financial transactions. Such tokens of authorization allow for enhanced security in transactions preventing petty theft and counterfeiting. Each note issued has an NFT digital token that acts as the token of authorization, meaning that there is more than one value for the banknote. There’s the physical note value and the NFT Authorization Token Value.

Each banknote has various serial numbers that function in the tracking (such as the genesis block number) and financial index (for credit transactions). The note has been approved by courts within the United States as Legal Tender for all global commercial, public, and private debts as stated on the banknotes themselves which were submitted as an exhibit attachment to the courts. The Note has been printed and crafted on the same heavy linen material as the U.S. dollar bill.

Where does the value of the note come from?

Based on the “Smartgold Feasibility Bekwei Report of Dec. 2015”, page 43 of 124 states the gold-bearing value of the alluvial reserves. So, if the gold spot price per ounce is $57.17 x 6g per meter assay result= $343.02 per GLU (Gold Land Unit= 1 square meter). This was calculated for Abola Piam Lands and Anamase Kingdom lands, but can be calculated the same for any land in which they have a verified assay report, thus all kingdoms can be furnished with notes based on the value of their lands.

Redeemable in meters of land per GLU increments:

“1 GLU Note= a claim of one meter of gold-bearing land.

King Nii Ayitey Anumle Oyanka, Achieved this feat through his Royal diplomatic appointee  “Noryaa Manste Adama Djata” whom he appointed as Chief of Business Development for Anamase Royal Alliance Council and Abola Piam Royal Council of which King Oyanka is the President and Chairman of both Traditional Councils. Nii Oyanka has been working tirelessly to create an international plan of alternative funding utilizing new fintech opportunities within the cryptocurrency and Forex international sectors. Within the last few months, Nii Oyanka and Nii Kenkeenfior laid the groundwork by establishing “Nibiru-Oyanka Management LTD”, an asset management company that has been approved for digital crypto banking and other financial engagements. This gesture enabled a multi-phase cryptobank and several other websites geared toward this goal that was created by Nii Adama Djata to be moved into a geographical territory that would be more conducive to the implementation of cutting edge ideas to counteract economic difficulties that have plagued the territories. After the restructuring of the ecosystem domains and servers to reflect it’s a new home in the Abola Piam/Anamase Kingdoms, by June, Nii Adama Djata initiated a proposal to Nii Oyanka, creating a new type of instrument that would be hosted on two cryptocurrency blockchains and would solve the problem of land dispute, asset distributions, while bearing traditional ancestral reverence that has not been witnessed in hundreds of years. Surpassing the threat of European impersonators to direct trading within the Universal Barter Exchange Credit Union (UBECU) located within the royal territory. Because UBECU has a SWIFT Market Identification Code or “MIC” and a Bloomberg LEI, it is an independent global financial marketplace, such as NASDAQ or DOW JONES, making King Oyanka and appointees the first royal kingdom to have their own globally recognized independent securities marketplace in Africa.

UBECU can be located in the SWIFT MIC Catalog or MIC database sites such as  https://www.tradinghours.com/mic/s/ubec, where you can see UBECU’s listing next to the list of other global world markets.

Previous VIDEO: Quamina MP reveals biggest regret of his life
Next Hon. Cecilia Abena Dapaah addresses the 9th session of the meeting of Parties to Water Convention in Geneva, Switzerland