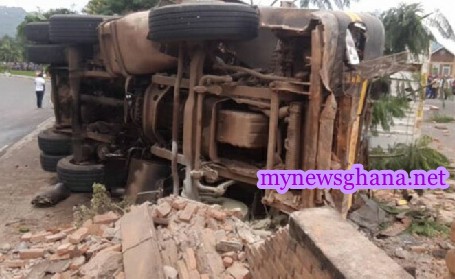 One person died on Tuesday after a trotro van ran into a truck parked on the shoulders of the road at Kenyasi in the Kwabre East Municipality of the Ashanti region, mynewsgh.com reports.

The driver of the trotro van reportedly lost control of his vehicle in his attempt to outrun a police patrol pickup which was chasing him for his failure to wear a nose mask as a measure of stopping the spread of the coronavirus.

Eyewitnesses say all persons on board the vehicle wore nose masks but the driver; police in the Ashanti region has in the last few days begun the enforcement of the NO NOSE MASK, NO ENTRY in the Greater Kumasi Metropolitan Area.

The deceased, 65-year-old Addai Fremah was in the company of her daughter and son-in-law at the time of the accident; she died on the spot while five other passengers who sustained various degrees of injury remain in critical condition.

Son of the deceased, Addai Francis said who confirmed the incident to Kumasi-based pure fm said his mother and two others were going to visit his brother’s wife at Atonsu in the Asokwa Municipality of the Ashanti region when she met her untimely death.

As part of measures to prevent further spread of the coronavirus in the country, the President and health authorities have urged the mandatory wearing of nose masks in public places; Regional Coordinating Councils (RCCs), Metropolitan, Municipal and District Assemblies (MMDAs) nationwide, have began the enforcement of mandatory wearing of nose masks.

Based on Section 169 of the Public Health Act, 2012 (Act 851), the Minister responsible for Health by Executive Instrument (E. I.65) declared COVID-19 a public health emergency and under Section 170(1) of the Act ordered a mandatory wearing of face and nose masks in public places as one of the preventive measures against COVID-19.

The Ashanti Regional Police Command has said it would make a statement on the issue soon.

Previous Infidelity: 60-year-old arrested for butchering his wife to death
Next Sonnie Badu offers to help ‘Apraku my daughter’