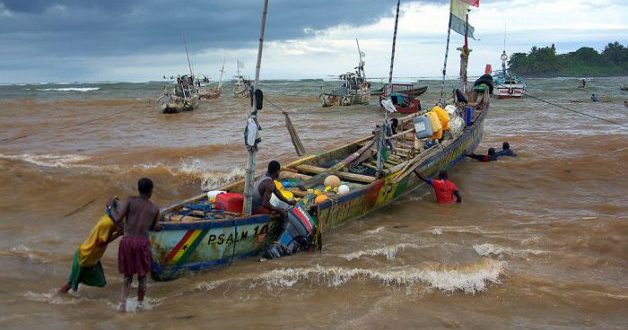 One person has died and two others reportedly missing after the trawl board shackle of a fishing trawler, FV Lurong Yuanyu 930, was broken during a fishing expedition in the Axim high seas.

Cosmos Tawiah, 34, died on the spot, while crew members, Oko Sowah, 40, and Stephen Nyarko, 34, are still missing after they were knocked off the vessel into the sea by the trawl wire attached to the trawler board.

A fourth victim, William Adjetey Mensah, who also sustained injuries, is receiving treatment at the Naval Base Clinic at Tema.

The body of Tawiah has been deposited at the Tema General Hospital awaiting autopsy.

A trawler board, made up of two heavy metals attached to some shackles (chains) with cables, serves as an important tool used to scratch the surface of the habitat which then goes to disturb the marine fisheries, moving them to seek refuge in the net which in turn harvests them.

The victims are said to be part of a 29-member crew made up of seven Chinese, 21 Ghanaians and a fisheries observer from the Fisheries Commission on a fishing expedition when the incident occurred at about 1:30 a.m. last Saturday.

Sources at the Tema Fishing Harbour told the Daily Graphic that the vessel and crew departed Tema on September 22, 2020, for fishing at about 1:30 a.m. on the day of the incident and had made an attempt to round up their activity.

According to the source, one of the attached metallic shackles broke “and because of the weight, it fell into the sea, pulling along Sowah and Nyarko who are still missing,” as the team tried to hook up the trawling board on the vessel after removing it from the sea.

The source indicated that the metallic hook on the shackle, however, hit both Tawiah and Adjetey Mensah.

Tawiah, who sustained deep cuts in the neck, the source indicated, bled from the nose and the neck leading to his death aboard the vessel.

The Crime Officer at the Marine Police Unit in Tema, Mr Felix Asare, confirmed the incident to the Daily Graphic, and said that the Command was awaiting a report on the incident from its officers and related security agencies that went aboard the vessel when it was brought to Tema with the body of the deceased.