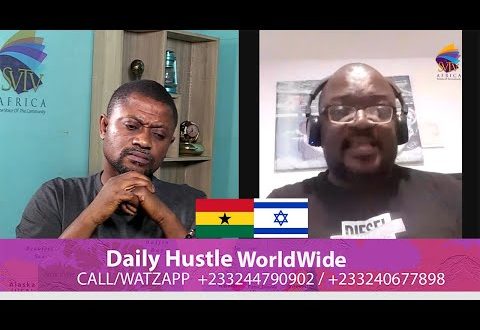 Former Ghanaian headteacher based in Israel, Enoch Forson, has disclosed that if anyone works in Israel and fails to establish a business back home, they may be retarded because Israel-based workers earn about GHS20,000 monthly.

In an interview on ‘Daily Hustle Worldwide’ on SVTV Africa, Enoch revealed that he stayed after visiting the country for an educational program. According to Enoch, there were many jobs available in the city of Eilat, but they lacked workers.

Despite the availability of jobs, the government is keen on reducing the population. As a result, the security at the borders is quite tight. Moreover, illegal immigrants with work permits may be deported. Speaking on salaries in Eilat, Enoch revealed that they make a lot even in hotels.

“If you come here and are unable to establish something back home, then you might be stupid. If you work in a hotel, you make GH12K in the morning and GH12K in the evening. That’s GH24,000, so if you take this money and still do not establish a business at home, are you not a fool?” he quizzed.

Enoch mentioned that depending on the number of hours an individual works, they could make up to GH20,000. However, once an illegal immigrant, there is the risk of being deported when arrested.