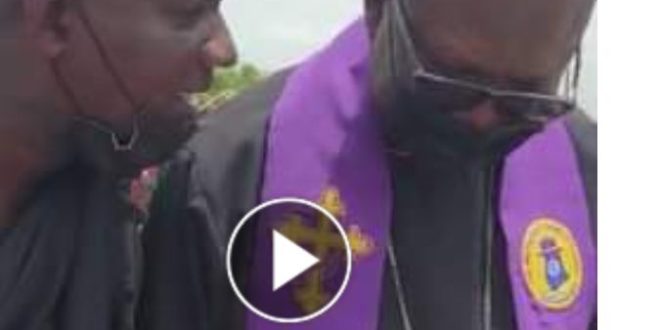 ‘You’re a hypocrite’ for being silent under Akufo-Addo – Appiah Stadium confronts Rev. Asante

Popular NDC serial caller Appiah Stadium has been captured on video accosting Rev Prof Emmanuel Asante, the past Chairman of the National Peace Council, and calling him “a hypocrite” for, in the opinion of his accuser, keeping silent on all the ills happening in Ghana under President Nana Akufo-Addo.

After exchanging greetings, Appiah Stadium first nicely inquired from the cleric why he has suddenly lost his voice on national issues since he was very vocal during the Mahama administration.

Rev Prof Asante explained to his interlocutor that during the Mahama era, he was the Chairman of the Peace Council but that was no more the case currently, and, thus, he cannot just speak without locus.

“I wasn’t speaking in my capacity as a Ghanaian then”, he explained to Appiah Stadium, clarifying: “I’m not [Rev Dr] Asante-Antwi” as he was referred to by the Kumasi-based serial caller.

Appiah Stadium then asked Rev Prof Asante if he was no more a Ghanaian now.

He then pointed out to the Reverend that the cost of a one-hour flight of the President alone can build a whole school block, contrasting that with the situation under former President John Mahama, who, he said, never embarked on such luxurious trips.

He then asked the man of God: “Are you sure you are not a hypocrite?”

A riled Rev Prof Asante then parried the hypocrisy charged levelled against him saying: “I’m not a hypocrite”, and then lunged at Appiah Stadium thus: “You’re the hypocrite”, explaining: “So far as you do your bidding, I will not do your kind of politics”.

The recriminations continued between the two with each of them aggressively pointing accusing fingers at the other as they parted company amidst a dispersing crowd of mourners at a funeral ground.

Appiah Stadium told the Rev Prof Asante that God would, one day, question him on his silence, to which the cleric retorted: “God will judge you more than me”, adding: “He [God] will cut your head”.

Appiah Stadium would have the last word, responding: “He [God] will cut your stomach; liar!”