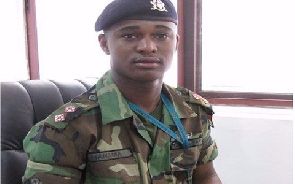 A 14-year-old witness in the murder trial of Major Maxwell Mahama says one of the suspects accused of killing the solider was in possession of a gun.

According to Hannah Dwumah, Kwesi Asante, the tenth accused person in the case on the day of the incident went to their room to pick a gun her father used in the bush.

She said the accused whom she referred to as “Uncle Kwesi Asante” failed to answer question as to where he was taking her father’s weapon.

The accused were among some among 32 suspected persons initially dragged before court of competent jurisdiction for allegedly playing various roles in the murder of the 5 Battalion of Infantry soldier on May 29, 2017.

Major Mahama was the commander of a military detachment stationed at Diaso in the Upper Denkyira West District of the Central Region to check the activities of illegal miners (galamseyers).

He was lynched by a mob who took him for an armed robber.

They have been charged with conspiracy to murder and murder.

However, the witness, led in evidence by Evelyn Keelson, Chief State Attorney in the trial further told the court that she had returned from school to pick her ‘chop money’ when she saw the accused dash into their room for the gun.

The Obuase RC Basic School student said he reported the action of Kwesi Asante to her father when she returned from school who also went to the Diaso Police station to lodge a complaint.

Hannah told the court that she also gave a statement to the police.

Under cross examination, the witness admitted that it had been long since she gave her statement to the police in May 2017 adding that she had not also refreshed her memory before giving her evidence in court.

Hannah confirmed her statement to the police that the gun Kwesi Asante picked from her father’s room was not functioning properly.

Asked how she could tell the gun was not functioning properly, Hannah disclosed that she got to know that her dad’s gun was not working because her father said it does not fire anytime he used it in the bush.

She said Uncle Kwesi used to come for the gun to kill pigs but he was not coming for it anymore because it did not fire.

Theophilius Donkor a member of the defense team wondered if Kwesi Asante had to seek permission from the witness’ father before using the weapon which she answered in the affirmative.

Hannah averred that Asante has been coming for the gun whenever her father is not around and that Asante comes to where her parents sell to play draft although are not relatives.