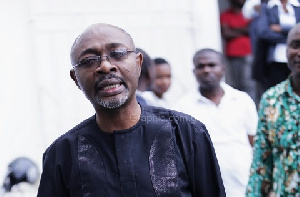 The woes of businessman Mr Alfred Agbesi Woyome, the man who has been ordered to pay back the GH¢51 million he illegally received from the state, are far from over, as the Attorney-General’s (A-G’s) Department has found fresh evidence of fraud against him.

Investigators at the A-G’s Department found that he allegedly fabricated evidence in court and this will form the basis for fresh legal action against him.

The Deputy Attorney-General, Mr Godfred Yeboah Dame, who disclosed this on Monday, said the department had forwarded a memo to the Criminal Investigations Department (CID) of the Ghana Police Service to investigate and prosecute Woyome for colluding with the erstwhile UT Bank to fabricate evidence about the ownership of his assets which the state attached through a SupremeCourt ruling.

“The final Supreme Court ruling was that Woyome had colluded with the UT Bank to practise fraud on the court. I have followed up on that matter and presented a memo to my boss, the Attorney-General, who has subsequently taken a move by writing to the CID to ensure the prosecution of Mr Woyome for the offence of fabrication of evidence,” he said.

Mr Dame made this known when he delivered the keynote address at the maiden Ghana Integrity Initiative (GII) Integrity Awards held in Accra yesterday.

The awards ceremony, which climaxed activities to mark the 20th anniversary of the GII, saw individuals and organisations whose work help fight corruption receive recognition for their efforts.

The Auditor-General, Mr Daniel Yaw Domelevo, was adjudged the Integrity Personality of the Year.

Mr Dame stressed that contrary to some assertions that the government had not done enough to recover the money from Mr Woyome, all was being done to retrieve the money by auctioning the culprit’s assets.

“In the Woyome case, the government has been able to fight all the endeavours used by the protagonist and I am happy to say that on Monday, December 2, there was an advert in the Daily Graphic for the auctioning of Mr Woyome’s assets on December 20, December 28 and December 31, based on the Supreme Court ruling.

“The state is pursuing a search for further assets owned by the man to ensure that every cedi paid to him is recovered,” he stressed.

He noted that because the Woyome case was a major issue on which the government rode to power, no stone would be left unturned to bring it to a closure.

He commended the GII for playing a leading role in the fight against corruption in the country and urged the anti-graft body to gird its loins and do more to help promote accountability.

While lauding anti-corruption crusaders for their roles in protecting the national purse from corrupt officials, he underscored the need for due processes to be followed in tackling corruption cases, especially when the cases were pending in court.

The Chairman of the GII Board, Mr Kwame Gyasi, bemoaned the level of corruption in the country and called on all stakeholders to play their part to help deal with the canker.

He stated that although Ghana was endowed with rich natural resources, failure to judiciously use those resources would make them useless.

After three years of a legal tussle over the true ownership of properties in the case involving Mr Woyome, the matter was settled on June 27, this year when the Supreme Courtordered the sale of the assets to defray the GH¢47.2 million debt he owes the state.

Assets to be sold include two mansions at Trassaco Estate, a house at Kpehe where he resides, an office complex of Anator Holdings, a residential building at Abelemkpe and a stone quarry in the Eastern Region, including its plants and equipment.

The court, with Mr Justice A. A. Bennin as the sole judge, held that the properties belonged to Woyome and that the claim by the UT Bank that the businessman had sold two houses at Trassaco Estate to the bank to defray his debt was a sham.

The Presiding Judge held that evidence adduced by the state in court showed there had been no sale of property to the UT Bank.

He said there was a clear collusion between the bank and Woyome to create the impression that the properties in dispute were for Woyome and later reverted to the bank for the repayment of a loan.

“I declare the sale as a sham,” Mr Justice Bennin said in the ruling.

Again, the apex court held that Woyome’s quarry was not used as collateral, as he and the bank had claimed.