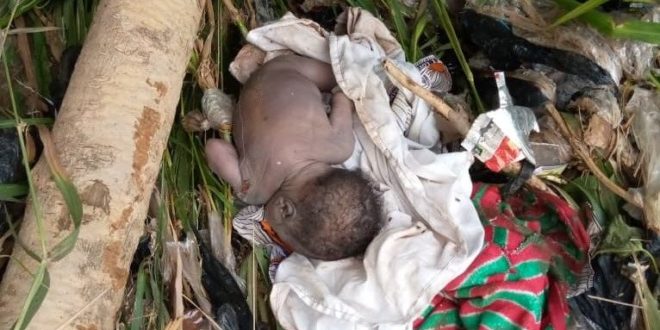 Woman arrested for dumping baby in a bush

The Ejura Police Command in the Ashanti Region has arrested a mother of eight named Wezenam Kuyiri for dumping her fresh baby in a gutter near the Ejura bridge leading to the innocent baby’s death.

According to Supt. Kingsley Owusu Bempah, his outfit had information that a fresh baby had been dumped following which hed led a team to retrieve the baby. She was sent to the Ejura Government hospital but was declared dead.

He told Naagyei FM Kwabena Adjei Adomarakwa that soon after the police commenced an investigation into the matter, they received information that a woman who had given birth in that suburb of Ejura the previous day is unable to tell the whereabouts of the baby after she was interrogated.

“So we proceeded and arrested her. She told us during interrogation that she was home when she found her baby foaming and because she didn’t have anybody to give her money to take the baby to the hospital she decided to dump her in a bush. She’s currently in our custody. Our investigation in her neighbourhood indicates that she’s normal. Her husband told us he’d wanted to send her to her mother to take care of her after delivery but she refused.”

Supt. Kingsley Owusu Bempah added that the police command is liaising with the family to collect the baby from the mortuary for burial.