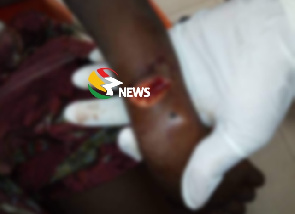 A middle-aged woman whose name has been given as Alice allegedly inflicted knife wound on her 10 year old daughter for allegedly stealing GH?5.00.

A school mate of the victim was said to have reported to the girl’s mother that she stole money from her bag on Thursday, February 14.

The mother, who is a chop bar operator, without any interrogation, pulled a knife and allegedly cut her daughter’s left arm with the knife, leaving a deep cut.

The incident took place at New Weija where the girl lives with her mother.

A neighbor who heard the girl’s cry upon returning from work rushed to the house and sent her to hospital.

The girl was taken to the Ga South Municipal Hospital popularly known as (Akawe) where the cut was stitched and she was later discharged.