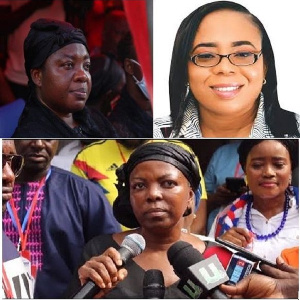 Wives of deceased MPs who succeeded them in Parliament

There is a growing trend of deceased Members of Parliament being succeeded by their spouses.

GhanaWeb chronicles some few observations of the trend since Ghana started practicing the fourth republican constitution.

In the run-up to the 2016 general elections, Linda Obenewaa Akweley Ocloo, was selected by the opposition National Democratic Congress (NDC) to step into the shoes of her late husband, Desmond William Ocloo, who was representing the NDC as their Parliamentary Candidate for Shai Osudoku.

The husband had, unfortunately, died on the spot in a road traffic accident in May 2016 in Juaso in the Asante Akyem South District of the Ashanti Region. In the accident, Desmond William Ocloo reportedly had a head-on crash with another vehicle, whose driver also died.

At the end of the 2016 general elections, Linda Ocloo won with 20,114 votes to beat three other contenders namely, Stephen Nene Oyortey of the New Patriotic Party (NPP), who garnered 6,518 votes, Emmanuel Maatey Tetteh of the Progressive People’s Party (PPP), who polled 3,203 votes and Solomon Dorh, who stood on the ticket of the Convention People’s Party (CPP) and got 154 votes.

In the run-up to the by-election held Thursday, January 31, 2019, Lydia Alhassan promised the people of Ayawaso West Wuogon to continue the good works started by her late husband, if she got the mandate to represent them in Parliament.

She rebuffed claims that authorities initiated developmental projects in the area days leading to the by-election just to score political points.

“Why are people saying we are undertaking developmental projects only because it’s time for [the] by-election… what we are doing is for the development of the community,” she said at the NPP’s final rally ahead of the by-election.

Lydia Alhassan, who was the second wife of Emmanuel Kyeremateng Agyarko polled 68.80 per cent of the valid votes cast. Her closest challenger, Mr Kwasi Delali Brempong of the opposition NDC polled 30.52 per cent, while William Kofi Dowokpor of the Progressive People’s Party (PPP) and Clement Boadi of the Liberal Party of Ghana (LPG) polled 0.58 per cent and 0.10 per cent respectively.

In the Mfantseman Constituency, the incumbent NPP only this week settled on Ophelia Hayford, the wife of Ekow Quansah Hayford, the MP who was murdered by some unknown assailants on Friday.

The incumbent party, according to reliable sources, sent a letter to the Electoral Commission on Monday in which they invoked sections of CI 127 that allows a 10-day extension of the nomination period within which time frame political parties could file for a replacement candidate.

The relevant provision states, “Where at the close of the nomination, but before the election one of the candidates dies, a further period of 10 days shall be allowed for nominations.”

When asked the reason for the party’s decision to settle on the wife of the late MP, John Boadu, the General Secretary of the NPP explained that they settled on Ophelia Hayford because “She knows the constituency very well and considering the large support that the husband had and the kind of difficulties that the constituency is going through, a lot more of the constituents think that we should let the wife continue”.

John Boadu indicated further that her name did not receive any form of dissent from Regional, Constituency and National Executives.

“There was massive consensus; no dissent at all,” he said, adding that “as the backbone of her late husband […] she is the right person to continue his good works.”

Ophelia Hayford is an Assistant Superintendent of Police but has had to resign from the Ghana Police Service to accept her new role.

This growing trend is generating controversy since it does not allow for party structures to follow agreed ground rules for working one’s way through grassroots to the top.

Anybody can be imposed on a constituency at any time, and then what happens to all those who have been working hard hoping that one day, they will win their respective parties’ nomination?