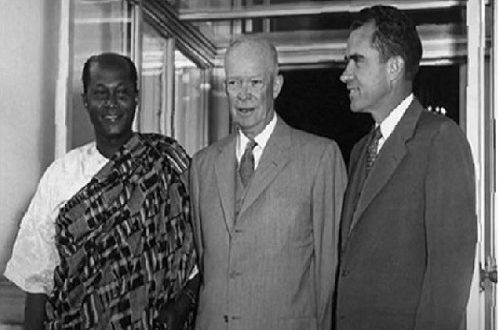 It was on the evening of October 10, 1957, when Komla Gbedemah, the finance minister of the newly formed nation of Ghana, and his secretary pulled up to the counter of a Howard Johnson restaurant in Dover, Delaware, USA, to buy orange juice. As they were given the juice, the waitress told them that they could not sit inside the restaurant because “colored people are not allowed to eat in here.”

The press soon learned of what had happened, and U.S. President Dwight Eisenhower had to apologize to Gbedemah and invite him to breakfast at the White House. Clearly, the incident, which was one of many in which African diplomats faced racial segregation in the U.S., made many U.S. officials uncomfortable, considering Washington and Moscow were competing for African “hearts and minds” during the Cold War, a report said.

“I believe the United States as a government, if it is going to be true to its founding documents, does have the job of working hard toward that time when there is no discrimination made on such [an] inconsequential reason as race, color, or religion,” a shamefaced President Eisenhower said following his meeting with Gbedemah.

Gbedemah and his secretary had thought they could sit inside the Delaware restaurant that fateful evening and have their drink but they were barred because of their skin color. Gbedemah even showed the waitress an identity card introducing himself as the finance minister of Ghana, but the waitress would not budge.

The manager was called to the scene, but he threw his weight behind the waitress, saying those were the rules. Gbedemah reportedly told the manager: “The [white] people here are of a lower social status than I am, but they can drink here, and we can’t. You can keep the orange juice and the change [from a dollar bill], but this is not the last you have heard of this.”

Gbedemah, who had entertained Vice President Richard Nixon during his tour of Africa that spring, added: “If the vice president of the U.S. can have a meal in my house when he is in Ghana then I cannot understand why I must receive this treatment at a roadside restaurant in America.”

When word of the incident spread through the diplomatic community, the State Department immediately issued an official apology while Wilson Flake, the U.S. ambassador to Ghana, described the episode as “an exceptional and isolated incident”, knowing that a complaint from the government of Ghana to Washington was imminent.

Then came the White House breakfast where President Eisenhower, who had just desegregated schools in Little Rock, “broke bread with Gbedemah, gave him a tour of the White House, discussed the financing of an important dam project, and by his quiet action, made it clear it was high time for the nation to move past such pettiness,” a media report said.

But “such pettiness” continued. In 1960 when about seventeen African nations gained their independence, they began sending their diplomats to Washington, D.C. As it was reported at the time, many of these diplomats suffered the humiliation of segregation while in the United States, from housing discrimination to being barred from entering segregated eateries and other public places.

What these African dignitaries and diplomats went through brought to light the fact that while the U.S. was preaching democracy throughout the Cold War, the civil rights of people of color in its field were being relegated to the background.

With such racist incidents denting the image of the U.S. on the world stage, it was forced to eventually support civil rights legislation. In other words, those diplomatic racist incidents continued until the passage of the Civil Rights Act of 1964, though recent protests against police brutality in the wake of George Floyd’s death have led to a larger conversation on racial and social injustice that still persists in America.

Indeed, the humiliating abuse of African diplomats in the 1950s and 1960s did bring attention to the troubling pattern of harassment and discrimination against Black people. And in the case of Gbedemah, two things came out of his White House breakfast meeting — the U.S. agreed to finance Ghana’s plan to build the Akosombo Dam on the Volta River and the Howard Johnson restaurant “changed its policy to serve whoever walked in the door.”